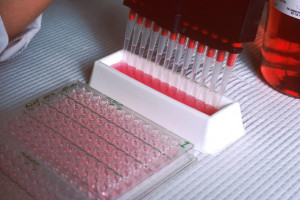 A study conducted by researchers at the Ludwig Center at Harvard has demonstrated how a drug screening method known as dynamic BH3 profiling can be used to quickly identify potentially effective combinations of existing drugs for personalised cancer therapy.

"Using BH3 profiling, we found a specific metabolic dependency in triple negative breast cancer cells obtained from a patient that we could target with an existing drug, making the cells more susceptible to death and priming them for a second targeted drug that could then trigger their death."

Though tumours often have unique metabolic adaptations on which they depend, specifically targeting those vulnerabilities with drugs has proved challenging. Such drugs have often failed in clinical trials because they were poorly targeted or too toxic at the doses required to kill cancer cells when used as single agents.

"We wanted to see which of the drugs known to perturb metabolism would bring the TNBC cells closer to dying, but leave normal cells unaffected," said Daniels. The researchers reasoned that such cells could then be selectively targeted by existing therapies known as BH3 mimetics to push them over the edge.

Because the initial priming treatment requires low doses of the drug, this strategy could lower the risk of toxicities that have troubled the development of drugs targeting cancer metabolism.

Therapy often induces in cancer cells a type of programmed death known as apoptosis, which is orchestrated by an elaborate protein machinery. Cells, however, also produce anti-death proteins that inhibit key elements of that machinery.

Whether a stressed cell dies or survives depends on the balance of pro-death and anti-death proteins, and cancer cells tend to produce large quantities of the latter to escape apoptosis and resist therapy.

BH3 mimetics inhibit anti-death proteins, tipping the balance in favour of cell suicide. Notably, one BH3 mimetic has already been approved for the treatment of certain blood cancers, and other such drugs are in various stages of development.

Dynamic BH3 profiling (DBP), developed in Letai's laboratory, measures that same balance of pro-death and anti-death proteins to gauge how primed a patient's tumour cells are for apoptosis following exposure to a drug.

It thus represents a potentially rapid and unbiased method for screening hundreds of drugs at a time to find those most likely to treat a given patient's tumours.

Two of these drugs target an enzyme known as NAMPT, which participates in one of three biochemical pathways that produce NAD+, a molecule of critical importance to metabolism.

Some sensitive TNBC cell lines, the researchers showed, were dependent on the pathway involving NAMPT. They also ran a DBP screen to find out which specific anti-death proteins the TNBC cells depended on for survival following NAMPT inhibition.

They used this information to identify the most effective BH3 mimetic drug to use in combination with NAMPT inhibitors.

Using two mouse models of patient-derived TNBC tumours developed in Brugge's lab, the researchers showed that only the mice bearing NAMPT-dependent tumours responded to a combination of the NAMPT inhibitor and the BH3 mimetic.

They propose that the NAMPT inhibitor, which proved too toxic as a single agent, might be repurposed as a combination therapy given at lower doses with BH3 mimetics.

"What we've shown overall is that we can use DBP to find metabolic regulators of apoptotic priming and specific anti-apoptotic dependencies in tumors--and so identify powerful combinations of metabolic compounds and BH3 mimetics for therapy," said Daniels.

Letai's laboratory is using DBP to methodically identify other drug combinations for the treatment of a variety of cancers. Because it is a functional drug screen--examining only whether a given drug primes cancer cells for death--DBP does not require prior knowledge of a cancer's inner workings or genetic aberrations.

"We don't have to be limited to drug targets that are identifiable only by genetic mutations, which are only a tiny fraction of the true targets out there in the cancer world," said Letai.

He and his colleagues are also planning a clinical trial using DBP to identify tailored therapies for individual patients diagnosed with myelogenous leukaemia.

Letai and Daniels note that the regular inter-lab meetings and collaborative model of the Ludwig Harvard Center were critical to the conception, design and conduct of the study.

"It was a way of combining a unique set of expertise," said Letai. "I'm good at cell death, not good at metabolism.

Veerle is good at metabolism and cell death, but was lacking some key tools to do her initial screening, so we turned to other members of the Ludwig Harvard Center who actually had those tools.

We wouldn't have been aware of that expertise if we weren't at the Center because Harvard is a very big place."