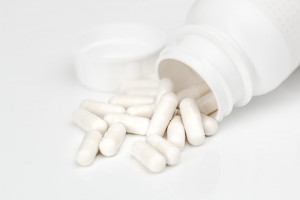 The study, published in the journal Nature, shows how a drug available on the NHS can boost fitness of healthy stem cells in the gut, making them more resistant to sabotage from mutant stem cells that cause cancer.

Researchers in the Netherlands, funded by the UK charity Worldwide Cancer Research, have discovered a way to boost the fitness of healthy cells in the gut to prevent the development of bowel cancer.

The findings have led to the initiation of a clinical trial to find out if a commonly used psychiatric drug could be used to prevent bowel cancer in people.

The trial will recruit patients with a genetic mutation that means they are virtually 100% certain to develop bowel cancer in their lifetime, unless the entire large bowel is removed.

Bowel cancer affects more than 43,000 people each year in the UK and just over half of the people diagnosed survive their disease for 10 years or longer.

It is thought that the majority of bowel cancer cases are caused by mutations in a gene called APC.

Intestinal stem cells with mutations to the APC gene have been shown to have a competitive advantage over their healthy counterparts and frequently outcompete them, leading to unrestricted growth and cancer.

Professor Louis Vermeulen, Group Leader at the Centre for Experimental Molecular Medicine at Amsterdam UMC, and senior author of the paper explained: "We have uncovered the very first steps in the development of bowel cancer. We found that following the occurrence of a mutation in a key gene that regulates stem cells in the intestine, these cells turn into cheaters that actively suppress the normal cells in the environment.

"This is a totally new concept as it was always thought that mutant cells that can turn into cancer simply proliferate faster or are resistant to cell death. But our findings indicate that cells on their way to a full malignancy can actively suppress the stem cells in the vicinity to gain a competitive edge. This is a concept we refer to as supercompetition."

Critically, the researchers also discovered a way to prevent the mutant stem cells from interfering with the healthy ones.

Lithium, a commonly used drug for the treatment of several psychiatric disorders, prevented the mutant stem cells from taking over and forming tumours in mice by rendering the healthy stem cells insensitive to the damaging signals.

A clinical trial funded by the Dutch Cancer Society (KWF) testing the effect of lithium of bowel cancer development in individuals with familial adenomatous polyposis (FAP) will now be performed in the Netherlands. FAP is a relatively uncommon genetic syndrome that affects about 1 in 7,000 to 1 in 22,000 people.

FAP patients have mutations in their APC gene and develop hundreds of non-cancerous polyps and adenomas in their bowel.

Without treatment nearly all of them will develop bowel cancer between the ages of 35 and 45.

The trial is set to recruit 10 young adult patients with FAP and will observe the patients before, during and after treatment with lithium for a total of 18 months.

The researchers will collect evidence on the preventive effect of lithium on mutant stem cells and polyp formation, as well as test the safety profile of lithium. Results of the clinical trial are likely to build the basis for larger trials with more patients.

Sanne van Neerven, PhD student who conducted the research, said: "Our clinical trial may reveal that lithium can be used to prevent cancer development in FAP individuals. But what is also important is that this trial can establish a proof of concept that manipulating competition between mutant cells and normal cells can be manipulated in such a way that the healthy cell outcompete the mutant cells. This is a novel strategy for cancer prevention and could be applied to many heritable cancer syndromes involving different mutations and organs, but more research is warranted in this area."

Dr Helen Rippon, Chief Executive at Worldwide Cancer Research said: "The discoveries made by Professor Vermeulen and his team are a huge breakthrough in our understanding of how bowel cancer develops. It's amazing to see innovative research like this go from the lab to the clinic as it shows just how important early-stage discovery research is to starting new cancer cures. We are all very excited to see the results from this clinical trial and the future impact these findings might have on other people with inherited cancer syndromes.

"Around 1% of bowel cancers are caused by familial adenomatous polyposis (FAP). This may seem like a small number, but in the UK alone this means that over 400 people are diagnosed with bowel cancer caused by FAP every year. The only treatment option available for people with FAP is major surgery to remove the entire colon, which can be life altering and unfortunately cannot guarantee that cancer won't develop. The launch of a clinical trial thanks to this incredible research will offer real hope to people that there could be a simple way to prevent bowel cancer in the future."