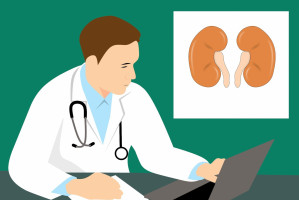 The immune nature of kidney cancer stands out when compared to other cancers. More immune cells infiltrate kidney cancers than most other solid tumours, and kidney cancer is one of the most responsive malignancies to today's immunotherapy regimens.

But despite treatment, many patients with clear cell renal carcinoma- (he most common type of kidney cancer) eventually relapse and develop incurable metastatic disease.

A new study shows that the presence of a rare and previously unknown type of immune cell in kidney tumours can predict which patients are likely to have cancer recur after surgery. These cells could even be driving aggressive disease.

"Our findings suggest that the presence of these cells could be used to identify patients at high risk of disease recurrence after surgery who may be candidates for more aggressive therapy," says co-senior author Charles Drake, MD, PhD, adjunct professor of medicine at Columbia University Vagelos College of Physicians and Surgeons and the Herbert Irving Comprehensive Cancer Center.

The study was published online in the journal Cell. Dr Andrea Califano, the Clyde and Helen Wu Professor of Chemical and Systems Biology and chair of systems biology at Columbia University Vagelos College of Physicians and Surgeons, also is co-senior author of the study.

Though kidney tumours are densely infiltrated by immune cells, cell subtypes and their association with post-surgical outcomes have remained largely unknown.

It's like looking down at Manhattan and seeing that large numbers of people from all over travel into the city every morning, says Aleksandar Obradovic, an MD/PhD student at Columbia University Vagelos College of Physicians and Surgeons and the study's co-first author. "To understand how these diverse commuters are interacting with Manhattan residents, we need finer details: Who are they; what are they like, where do they go, and what are they doing?"

To uncover the fine details of the immune cells that infiltrate kidney cancers, the researchers combined two of the newest techniques in cancer research.

The first, called single-cell RNA sequencing, captures a snapshot of gene activity in individual cells within a tumour. This high-throughput technique allows researchers to obtain such snapshots inside of tens of thousands of cells from one tumour in a single experiment, providing insights into the identity and behaviour of the various cell types.

This powerful technique can identify new types of cells, but there is a drawback. Because single-cell sequencing works by detecting a small number of mRNA molecules inside each cell, it often fails to detect the mRNAs of genes with low expression levels, including key signalling genes and drug targets such as immunotherapy checkpoints.

"In many experiments, single-cell RNA sequencing misses up to 90% of gene activity, a phenomenon known as gene dropout," Obradovic says.

The researchers addressed gene dropout by developing a prediction algorithm that can infer which genes are active by looking at the expression of other related genes.

"Even when a lot of the data are missing due to dropout, we still have enough clues to infer the activity of the upstream regulator gene," Obradovic says.

"It's like playing 'Wheel of Fortune': I can usually guess what's on the board even when most of the letters are missing."

The algorithm, called meta-VIPER, builds on the VIPER algorithm developed in the Califano laboratory. Califano is also director of the JP Sulzberger Columbia Genome Center in the Herbert Irving Comprehensive Cancer Center.

With the addition of metaVIPER, the researchers estimate they can accurately detect the activity of 70% to 80% of all regulatory genes in each cell, eliminating dropout across cells.

This combined approach was used to analyse more than 200,000 tumour cells and normal cells in adjacent tissue taken from 11 patients with clear cell renal carcinoma who underwent surgery in the Department of Urology at Columbia.

The analysis revealed a unique sub-population of immune cells called macrophages found only in tumours and associated with eventual relapse of disease after initial treatment. The VIPER analysis also revealed the top genes (or master regulators) that control the activity of these macrophages.

Furthermore, these macrophages were found to interact directly with tumour cells through receptor-ligand gene pairs.

"These data raise the intriguing possibility that these macrophages are not just markers of more risky disease but may actually cause the disease to recur and progress," Obradovic says, "and that targeting these cells could improve clinical outcomes."

Thus VIPER-based technologies, such as Oncotreat test, could be used to identify drugs targeting these rare but critical subpopulations, thus preventing the poor outcomes associated with their presence, Califano says.

Techniques Could Be Applied to Other Cancers and Diseases

The combination single-cell sequencing with the VIPER algorithm has potential to dissect other types of cancer too, the researchers say.

"Our study demonstrates that the two techniques, when combined, are highly effective at characterising the cells within a tumour and in surrounding tissues and should have broad applicability, even beyond the study of cancer," Drake says.