Important factor in the development of dendritic cells identified 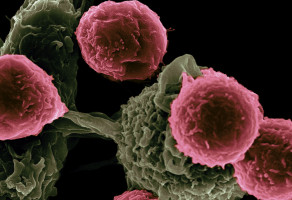 The human immune system comprises functionally specialised cellular defence mechanisms that protect the body against disease. These include the dendritic cells. Their main function is to present antigens to other immune cells, especially T cells, thereby activating a primary immune response.

Each type fulfils different functions: DC1 provide an immune response to bacteria and viruses, DC2 protect against fungal or parasitic infections. In a recent study conducted at MedUni Vienna's Institute of Cancer Research, researchers found that a particular group of proteins plays a major role in the development of Type 1 dendritic cells.

This could open up new therapeutic options in the defence against viruses or bacteria but also for cancer immunity.

Dendritic cells are formed from multipotent progenitor cells in the bone marrow. However, it was hitherto unclear which proteins are responsible for this transition from stem cells to differentiated cells.

The study, which has now been published in Cell Death and Differentiation, used animal models and molecular biology techniques such as RNA sequencing to show that a combination of two proteins known as "c-Jun" and "JunB" are essential factors in the development of Type 1 dendritic cells.

In order to analyse the role of these proteins, the c-Jun- and/or JunB gene was deleted in dendritic cells. "This showed that c-Jun and JunB are jointly, but not individually, essential for DC1 development," says second study author, Barbara Drobits from the Institute of Cancer Research and CCC

. The mechanism in detail: working in a never previously described synergy, the c-Jun/JunB transcription factor pair together controls the development of DC1. "An expression analysis of DC1 lacking c-Jun/JunB, showed changes in the cellular identity, and a shift towards DC2."

At the same time, the immunological functions of DC1 were greatly reduced when c-Jun/JunB were lacking. Differences were also found in an infection model. In the animal model, deactivation of c-Jun/JunB protected against infection with the bacterium Listeria monocytogenes.

"The results describe a previously unknown function of c-Jun/JunB in the development of dendritic cells. It has already been shown in previous studies that another member of the

AP-1 family known as Batf3 is necessary for DC1 development, in that it regulates the expression of the transcription factor IRF8. However, it was not clear with which AP-1 protein Batf3 interacts to perform this function. Our data now provide this "missing link", in that they point to c-Jun/JunB as being Batf3's tango partner," summarise the study authors.

DC1 are essential for defending against bacteria and viruses as well as for immunity to cancers - a better understanding of the underlying biology could therefore provide new, promising therapeutic approaches for future clinical application.