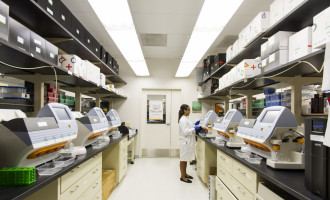 With this technology, the profile changes in genome organisation and create a large-scale atlas of how the loss of individual chromatin-altering enzymes impacts the human genome.

The new method harnesses the programmability of the gene-editing system CRISPR to knock out nearly all chromatin-related genes in parallel, offering researchers deeper insights into the role of DNA accessibility in cancer and rare diseases involving chromatin.

Recent advances in single-cell technologies have given scientists the ability to profile chromatin, the complex of DNA and proteins that reside within the nucleus of individual cells.

Chromatin is often called the "gatekeeper" of the genome because its proteins act as packaging elements for the DNA, either promoting or refusing access to it.

This controls gene expression processes in the cell, such as turning on or off specific genes. Changes in the chromatin landscape have been linked to diverse human traits and diseases, most notably cancer.

In an initial demonstration of CRISPR-sciATAC, the Sanjana Lab team designed a CRISPR library to target 20 chromatin-modifying genes that are commonly mutated in different cancers, including breast, colon, lung and brain cancers.

Many of these enzymes act as tumour suppressors and their loss results in global changes in chromatin accessibility. For example, the group showed that loss of the gene EZH2, which encodes a histone methyltransferase, resulted in an increase in gene expression across several previously silenced developmental genes.
"The scale of CRISPR-sciATAC makes this dataset very unique. Here, in a uniform genetic background, we have accessibility data capturing the impact of every chromatin-related gene.

This provides a detailed map between each gene and how its loss impacts genome organisation with single-cell resolution," said Dr Noa Liscovitch-Brauer, a postdoctoral fellow in Sanjana's lab at the New York Genome Center and NYU and the study's co-first author.

In total, the team targeted more than 100 chromatin-related genes and developed a "chromatin atlas" that charts how the genome changes in response to the loss of these proteins.

Overall, the greatest disruption in transcription factor binding sites, which are important functional elements in the genome, was observed after the loss of AT-rich interactive domain-containing protein 1A (ARID1A), a member of the BAF complex. Mutations in BAF complex proteins are estimated to be involved in 1 out of every 5 cancers.
In addition to the CRISPR-sciATAC method, the team also developed a suite of computational methods to map the dynamic movements of the nucleosomes, which are the protein clusters that DNA is wrapped around.

When there are more nucleosomes, the DNA is tightly wound and less available to bind transcription factors. This is exactly what the team found at specifical transcription factor binding sites involved in cell proliferation after CRISPR knock-out of ARID1A.

When targeting a different chromatin-modifying enzyme, these same sites underwent an expansion in nucleosome spacing, demonstrating the dynamics of nucleosome positioning at specific sites in the genome.

"We focused on making CRISPR-sciATAC an accessible technique -- we wanted it to be something that any lab could do.

We produced most of the key enzymes in-house and used simple methods for single-cell isolation that do not require microfluidics or single-cell kits," said Dr Antonino Montalbano, a former postdoctoral fellow in Sanjana's lab at the New York Genome Center and NYU and the study's co-first author.

To develop the CRISPR-sciATAC technology, the researchers used a mix of human and mouse cells to create a tagging/identification process that allowed them to split and barcode the nuclei of cells as well as capture the single-guide RNAs required for CRISPR targeting.

The work builds off prior single-cell combinatorial indexing ATAC-seq (sciATAC-seq) work from Dr Jay Shendure at the University of Washington and other groups developing new single-cell genomics methods. CRISPR-sciATAC also uses a unique, easy-to purify transposase that was developed in the NYGC's Innovation Technology Lab.

A key technical hurdle was optimising experimental conditions to simultaneously capture the CRISPR guide RNAs and genome fragments for accessibility profiling while also keeping the nuclear envelope of each cell intact.

"With CRISPR-sciATAC, we have a comprehensive view into how specific chromatin-modifying enzymes and complexes change accessibility and orchestrate the interactions that control gene expression.

Chromatin sets the stage for gene expression, and here we can measure the impact of different mutations on chromatin rapidly.

We hope this atlas will be a broadly useful resource for the community and that CRISPR-sciATAC will be used to produce similar atlases in other biological systems and disease contexts."