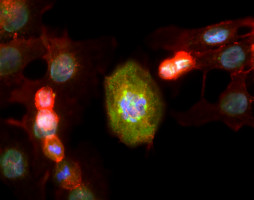 Targeting a pathway that is essential for the survival of certain types of acute myeloid leukaemia could provide a new therapy avenue for patients, the latest research has found.

Researchers from the Wellcome Sanger Institute found that a specific genetic mutation, which is linked with poor prognosis in blood cancer, is involved in the development of the disease when combined with other mutations in mice and human cell lines.

The study, published in Nature Communications, provides a greater understanding of how the loss-of-function mutation in the CUX1 gene leads to the development and survival of acute myeloid leukaemia.

The findings suggest that targeting a pathway that is essential for these cancer cells to continue growing could lead to new targeted therapies for some patients.

It typically develops in cells within the bone marrow to crowd out the healthy cells, in turn leading to life-threatening infections and bleeding. Mainstream AML treatments have remained unchanged for decades and fewer than one in three people survive the cancer.

Previously through large-scale DNA sequencing analysis, researchers at the Wellcome Sanger Institute found that loss-of-function mutations in the CUX1 gene on chromosome 7q were seen in several types of cancer, including AML, where it is associated with poor prognosis.

However, the role of this gene in AML development is unclear.

In this new study, the team used CRISPR/Cas9 gene-editing technology to show that lack of functioning CUX1 leads to expansion of certain types of blood stem cells, which are defective in a type of regulated cell death known as apoptosis.

They found that the loss of CUX1 causes increased expression of the CFLAR gene -- which encodes a protein that restrains apoptosis -- potentially providing a means for mutated cancer cells to evade cell death and propagate.

The researchers showed that targeting CFLAR, or apoptosis evasion pathways in general, could be a possible treatment for those living with this type of AML that is linked to poor prognosis. Currently, there are no clinically approved drugs that target CFLAR.

Dr Saskia Rudat, co-first author and Postdoctoral Fellow at the Wellcome Sanger Institute, said: "By investigating the role of CUX1 further, we now have new insight into how this gene, and the lack of it when mutated, plays a key role in the survival of blood cancer cells.

While this mutation doesn't seem to cause the development of malignant disease on its own, focusing on the pathways involved with CUX1 is a good target for further research."

Dr Emmanuelle Supper, co-first author and Postdoctoral Fellow at the Wellcome Sanger Institute, said: "By building on our previous analysis, this research has allowed us to gain crucial information about the development of this disease, and would not have been possible without the new and exciting CRISPR/Cas9 and genome sequencing technologies that enable us to investigate genetic weaknesses in cancer.

Understanding more about the genetic basis of disease, and how multiple mutations come together to cause blood cancer is vital if we hope to save lives in the future."

Dr Chi Wong, senior author and Wellcome Clinical Fellow at the Wellcome Sanger Institute and Honorary Consultant Haematologist at Addenbrooke's Hospital, said: "Acute myeloid leukaemia is a devastating disease, which is currently difficult to treat, especially in cases characterised by genetic lesions such as loss of CUX1 and chromosome 7q deletions.

This new study provides evidence that could be used to help develop new targeted treatment for some people living with acute myeloid leukaemia, offering hope for this group of patients who unfortunately are more likely to have a poor prognosis."