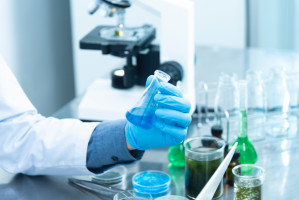 Researchers from the University of East Anglia have developed a new urine test for prostate cancer which also shows how aggressive the disease is.

A new study published today shows how an experimental new test called 'ExoGrail' has the potential to revolutionise how patients with suspected prostate cancer are risk-assessed before an invasive biopsy.

The research team say their new test could reduce the number of unnecessary prostate cancer biopsies by 35 per cent.

Prostate cancer is the most common cancer in men in the UK.

It usually develops slowly and the majority of cancers will not require treatment in a man's lifetime.

The most commonly used tests for prostate cancer include blood tests, a physical examination known as a digital rectal examination (DRE), an MRI scan or an invasive biopsy.

However, doctors struggle to predict which tumours will become aggressive, making it hard to decide on treatment for many men.

Lead researcher Dr Dan Brewer, from UEA's Norwich Medical School, said: "While prostate cancer is responsible for a large proportion of all male cancer deaths, it is more commonly a disease men die with rather than from.

"Therefore, there is a desperate need for improvements in diagnosing and predicting outcomes for prostate cancer patients to minimise over-diagnosis and over treatment whilst appropriately treating men with aggressive disease, especially if this can be done without taking an invasive biopsy.

The research team developed the new ExoGrail urine test by combining two biomarker sources - measurements of a protein-marker called EN2 and the levels of gene expression of 10 genes related to prostate cancer risk. It builds on previously developed tests called PUR and ExoMeth.

They tested it using urine samples from 207 patients who had been undergone a biopsy for prostate cancer at the Norfolk and Norwich University Hospital (NNUH).

When the urine results were compared to biopsy results, the study showed that the test had successfully shown which patients had prostate cancer and which did not.

The ExoGrail test also provided risk scores for patients and highlighted those for which an invasive biopsy would have been beneficial.

The findings show that using information from multiple, non-invasive biomarker sources has the potential to greatly improve how patients with suspected prostate cancer are risk-assessed before an invasive biopsy.

Dr Brewer said: "Our new urine test not only shows whether a patient has prostate cancer, but it importantly shows how aggressive the disease is. This allows patients and doctors to select the correct treatment.

And it has the potential to reduce the number of unnecessary biopsies by 35 per cent."

The research team was led by Dr Shea Connell, Prof Colin Cooper, Dr Daniel Brewer and Dr Jeremy Clark, all from UEA's Norwich Medical School, in collaboration with the Norfolk and Norwich University Hospital, the University of Surrey, the University of Bradford, The Earlham Institute, and The Movember GAP1 Urine Biomarker Consortium.

Paul Villanti, executive director of programmes at Movember, said: "We are proud to have supported the development of the ExoGrail urine test as part of our Global Action Plan Urine Biomarker project.

"Having non-invasive tests which can accurately show how aggressive a man's prostate cancer does not only reduce the number of men having to undergo painful biopsies, but also ensures that the right course of treatment for the patient is selected more quickly."