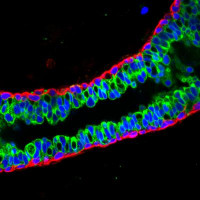 Researchers at the University of California, San Francisco, have discovered that aggressive, triple-negative breast cancers (TNBCs) can evade treatment by reorganising and softening the collagen matrix that surrounds the cancer cells.

The study, published  the Journal of Experimental Medicine (JEM), shows that the softer matrix activates a signalling pathway that promotes the cancer cells' survival, and suggests that targeting this pathway could enhance the effectiveness of chemo- and radiotherapy in TNBC patients.

TNBC is an aggressive type of breast cancer with worse survival rates than other forms of the disease.

Because TNBC cells lack the HER2 signalling receptor and the oestrogen and progesterone hormone receptors, they cannot be eliminated by drugs that specifically target these proteins.

Instead, TNBC patients are normally treated with a combination of surgery and chemotherapy/radiation, but these treatments are often unable to completely eliminate the tumour, leading to local recurrence and metastasis to other tissues.

"Currently, there are no reliable methods to identify patients that are likely to respond well and those that are likely to be resistant to treatment," says Valerie M. Weaver, a professor and Director of the Center for Bioengineering and Tissue Regeneration in the Department of Surgery at UCSF.

"There is an urgent need for a deeper understanding of the biological basis for therapeutic response in TNBC that will inform treatment decisions and the development of effective strategies to overcome therapy resistance."

One factor that could influence the response to therapy is the meshwork of collagen and other proteins that surrounds the cancer cells within tumours.

This extracellular matrix can activate various signalling pathways within cells that determine whether or not cells die when they are exposed to stress.

Weaver and colleagues, including Catherine C. Park, professor and Chair of the Department of Radiation Oncology at UCSF, and graduate student Allison P. Drain, analysed the extracellular matrix in tumour samples taken from TNBC patients.

In untreated TNBC, collagen proteins were aligned into long, linear fibres, creating a matrix that is much stiffer than normal, healthy breast tissue.

But in TNBC treated with chemotherapy, the collagen fibres in the remaining tumour were reorganised to form a much softer matrix.

"This raised the intriguing possibility that the softened, remodelled extracellular matrix might be causally linked to the pathogenesis of the treatment-resistant, residual tumour tissue," Weaver says.

The researchers found that tumours grown in the lab or in mice were more resistant to both radiation and the chemotherapy agent paclitaxel when they were surrounded by a softer extracellular matrix.

Cancer cells grown in a stiff environment activate a signalling protein called JNK that makes the cells more likely to die in response to stress.

"Therapies designed to modulate stiffness-dependent NF-κB or JNK activity might therefore improve the treatment response of TNBCs and enhance the long-term survival of these patients," Weaver says.

"However, further efforts will be needed to clarify the nature of the mechanisms that mediate treatment resistance and develop effective, selective, and safe therapeutics."