The enemy within: Understanding the mechanisms of r-chop resistance in b-cell lymphoma 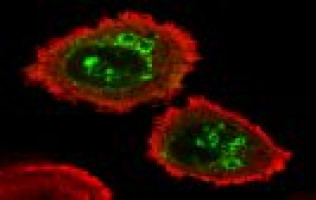 White blood cells or lymphocytes are the soldiers of our immune system that patrol the body via the lymphatic system.

While their primary role is to protect the body by scavenging invaders, they can sometimes go rogue and become the enemy.

Lymphoma, a type of blood cancer, results from the uncontrolled proliferation of lymphocytes.

They are classified as Hodgkins and Non-Hodgkins lymphomas on the basis of the cell of origin and clinical characteristics.

Of them, diffuse large B-cell lymphoma (DLBCL) is the most common Non-Hodgkins lymphoma and is highly aggressive and fast-growing.

A combination of rituximab plus cyclophosphamide, doxorubicin, vincristine, and prednisone (R-CHOP) is the standard treatment regimen for DLBCL.

The regimen has demonstrated significant improvement of patient prognosis and overall survival.

However, about 40% of the patients either develop resistance to therapy and respond poorly, while a large portion of those who initially respond well to the treatment eventually relapse.

It is thus imperative to understand the molecular mechanisms underlying treatment response and resistance to R-CHOP therapy to improve patient outcomes.

Now, researchers from China have addressed these lacunae in their review article recently published in Chinese Medical Journal.

Dr. Liang Wang, a co-author of the review, uses an interesting analogy to simplify why this is essential.

"I would not recommend a high-carbohydrate diet to you if you are diabetic.

Similarly, for DLBCL patients, if they harbour certain specific molecular signatures and clinical features that can predict resistance to R-CHOP, they must not be recommended R-CHOP therapy.

Our comprehensive review discusses such predictive factors in depth that can help improve patient prognosis", he explains.

While the major signalling pathways that contribute to DLBCL have been uncovered, variations in the genes involved in these pathways can differentially impact treatment response, suggesting that one treatment may not benefit all patients.

Sub-groups of the cancer have been identified based on differences in gene expression profiles.

Interestingly, these signatures rarely overlap and correlate with specific outcomes.

Based on this, genes associated with better or worse prognosis can thus be chalked out as predictors of treatment response and potential resistance.

However, the tumour microenvironment, comprising a milieu of immune factors, cells, and extracellular components, greatly influences how the tumour responds to the drug.

Drug-resistant and unresponsive lymphomas are known to harbour genetic variations that enable the tumour to evade the drug molecules, thereby making them tolerant towards R-CHOP treatment. R-CHOP has even been reported to activate certain oncogenes (genes that can cause cancer) and favour a specific subset of cells also referred to as sub-clonal populations.

Such cells harbour genetic variations that confer growth advantages and can thus cause recurrent cancer.

Alterations in the B-cell receptor, PI3K-Akt, NF-kB, and JAK-STAT3 pathways can also cause drug resistance.

Besides these, changes in epigenetic modifiers (that induce reversible genetic changes) have also been widely reported in drug-resistant and refractory lymphoma.

These pathways could be potential predictive markers that can help screen for R-CHOP-resistant lymphomas.

Moreover, some lymphomas bear more than one key alteration also known as "double hit" or "triple hit" lymphomas. In such cases, a combination therapy is likely to work better.

Overall, their review lays the foundation for identifying patients with DLBCL who are likely to develop resistance to R-CHOP treatment and consider alternative therapies that can benefit such patients.

Explaining the long-term implications of their work, Dr. Wang remarks, "Patients who are refractory to R-CHOP have a median survival of merely 10 months.

If specific clinical features can be identified at the time of diagnosis of DLBCL, patients can be treated with alternative effective therapies apart from R-CHOP. Such tailored treatment will help significantly improve the prognosis and survival rate of such patients."

Armed with a better understanding of the molecular landscape of DLBCL, we can certainly expect improved patient classifications and personalised treatment in the near future.