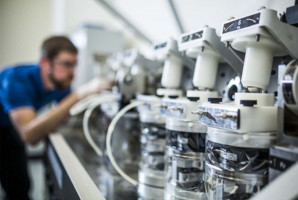 Use of a cosmetic laser invented at Massachusetts General Hospital (MGH) may improve the effectiveness of certain anti-tumour therapies and extend their use to more diverse forms of cancer.

The strategy was tested and validated in mice, as described in a study published in Science Translational Medicine.

Immune checkpoint inhibitors are important medications that boost the immune system's response against various cancers, but only certain patients seem to benefit from the drugs.

The cancer cells of these patients often have multiple mutations that can be recognised as foreign by the immune system, thereby inducing an inflammatory response.

In an attempt to expand the benefits of immune checkpoint inhibitors for additional patients, a team led by David E. Fisher, MD, PhD, director of the Mass General Cancer Center's Melanoma Program and director of MGH's Cutaneous Biology Research Center, conducted experiments in mice with a poorly immunogenic melanoma that is not hindered by immune checkpoint inhibitors.

The researchers found that exposing the melanoma cells to ultraviolet radiation caused them to take on more mutations, which made immune checkpoint inhibitors more effective at boosting the immune response against the melanomas.

"Epitope spreading could be important because many human cancers do not have very high mutation numbers, and correspondingly do not respond well to immunotherapy, so a treatment that can safely target nonmutated proteins could be valuable," Fisher explains.

The researchers next sought to find a substitute for the response triggered by mutations after ultraviolet radiation, since it's likely not safe to add mutations to a patient's tumour as a treatment strategy.

"We discovered that use of a cosmetic laser, also known as a fractional laser, developed at MGH, when shined on a tumour, could trigger a form of local inflammation that mimicked the presence of mutations, strongly enhancing immune attacks against nonmutated tumour proteins, thereby curing many mice of tumours that otherwise did not respond to immunotherapy," says Fisher.

The findings suggest that using such a laser approach, or other methods to optimise immune responses against nonmutated targets on tumours, might make immune checkpoint inhibitors effective against currently incurable cancers.