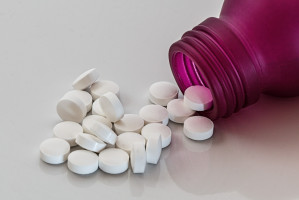 The drug thalidomide was sold as a sedative under the trade name Contergan in the 1950s and 1960s.

At the time, its side-effects triggered one of the largest pharmaceutical scandals in history: The medication was taken from the market after it became known that the use of Contergan during pregnancy had resulted in over 10,000 cases of severe birth defects.

Currently, the successor preparations lenalidomide and pomalidomide are prescribed under strict supervision by experienced oncologists - the active ingredients are a cornerstone of modern cancer therapies.

The use of lenalidomide and pomalidomide has considerably improved the success rate of therapies and patient survival, particularly for haematological malignancies such as multiple myeloma.

Since these substances can influence the immune system, they are referred to as immunomodulatory drugs (IMiDs).

Previous studies have shown that IMiDs bind to a protein called cereblon, which results in the malfunction of a protein complex on the surface of tumour cells, thus inhibiting tumour growth.

A research team led by Prof. Florian Bassermann and Vanesa Fernández of the university hospital Klinikum rechts der Isar of TUM has now deciphered the exact mechanism and the scope of this dysregulation in a new study.

They discovered that cereblon supports the protein HSP90 as what is known as a co-chaperone; HSP90 is responsible for the correct folding of thousands of proteins in human cells.

The scientists were able to show that the support function of the co-chaperone cereblon is specific for membrane proteins.

These proteins, which are anchored on the surface of a cell, are essential for tumour cells to grow: They enable cells to communicate with neighbouring cells, they pass on growth signals and take in important nutrients.

Upon IMiD-treatment, cereblon can no longer bind to the HSP90 machinery, and as a result loses its supportive function in the quality control of membrane proteins.

"Using proteome-wide analyses, we were able to show that a large number of essential proteins on the surface of cancer cells are destabilised by IMiD-treatment," says oncologist Florian Bassermann. "This ultimately explains the unusually broad effects of these substances."

In multiple myeloma the proteins CD98hc and LAT1 are particularly affected.

Together these proteins usually ensure that cancer cells are supplied with amino acids.

Since cancer cells in the case of multiple myeloma have an especially high need for nutrients like amino acids, CD98hc and LAT1 are very abundant proteins in these cells.

The research team has now shown that IMiD-treatment significantly reduces the uptake of essential amino acids and thus inhibits the growth of the tumour cells.

"This literally starves out the cancer cells," explains Michael Heider, first author of the study.

The discovery that multiple myeloma cells can be attacked by targeting the proteins CD98hc and LAT1 opens up new possibilities for innovative therapies in this currently incurable cancer.

Together with Wolfgang Weber, TUM Professor for Nuclear Medicine, the researchers tested a molecule which is aimed at CD98hc, known as an anticalin. The molecule was recently developed by Arne Skerra, Professor for Biological Chemistry at TUM.

The results show that the molecule binds specifically to the cell surface protein CD98hc in both cell culture and mouse models.

This anticalin could therefore be used for targeted therapy and diagnosis in the future.