Singles or pairs in cancer cells 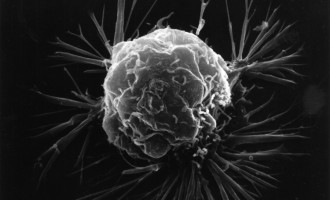 It all sounds similar to a dance event - but are singles or couples dancing here? This was the question Ali Isbilir and Dr. Paolo Annibale at the Max Delbrück Center for Molecular Medicine in the Helmholtz Association (MDC) were trying to answer. However, their investigation did not involve a ballroom, but the cell membrane.

The question behind their investigation: does a particular protein receptor on the surface of cancer and immune cells appear alone or connect in pairs?

The receptor is called "CXCR4" - the subject of heated debate among experts in recent years due to its mysterious relationship status. Does it appear in singles or pairs on the cell membrane? And what makes the difference?

The research team of the Receptor Signaling Lab at the MDC, has now solved the puzzle of its relationship status for the first time. Their findings were recently published in the journal Proceedings of the National Academy of Sciences" (PNAS).

"When CXCR4 is found in large numbers on cancer cells, it also ensures that they can migrate, thereby laying the foundation for metastases," says lead author Isbilir. Metastases are known to be difficult to treat; some patients die as a result of these secondary tumours.CXCR4 is also involved in inflammations. The centre of inflammation releases messenger substances from the chemokine class. In lymph nodes, chemokines ensure that immune cells form many CXCR4 receptors on their membrane. With the help of these receptors, immune cells can locate the centre of inflammation and migrate to it. The name CXCR, which stands for "chemokine receptor," also refers to this ability.

"Such receptors are the most important target structures in pharmaceutical research," emphasises Professor Martin Lohse, the last author of the study. "Approximately one-third of all drugs address this class of receptors."

Whether such receptors are present as pairs or singles is therefore not only central to basic research, but also to the pharmaceutical industry.

Using new methods of optical microscopy, the team has now been able to answer this question for the first time.

Apparently, CXCR4 wants to remain noncommittal - it occurs temporarily in pairs (as a transient dimer), but also alone (as a monomer).

The team found that the relationship status depends largely on how many CXCR4 receptors are located on a cell. If the cell surface is densely occupied, more pairs are formed.

If only a few receptors are present, they more often appear singly.

At the same time, the researchers could show that certain drugs acting as CXCR4 blockers can suppress pair formation.

"It is assumed that CXCR4 pairs negatively affect one's health. We can use our new microscopic methods to test whether this is really the case," explains Lohse.

The scientists combined two recent optical microscopy methods: Using single-molecule microscopy, they were then able to determine the relationship status of individual CXCR4 receptors on the surface of living cells.

Fluorescence fluctuation spectroscopy also made it possible to measure the relationship status in cells that had a large number of receptors.

The special feature here: to do this, the researchers had to develop a method to efficiently mark all receptors.

They also had to develop a highly sensitive microscopy strategy with which they could see individual molecules and their oligomerisation.

The team will soon present the new methods in a report in the journal Nature Protocols.

"The exciting thing is that we can now use these fluorescence methods to study living cancer cells. We can find out whether CXCR4 is present in pairs or alone," says Annibale, who is co-head of the Receptor Signaling Lab and also last author of the study in "Nature Protocols". "And then we can apply CXCR4 blockers to singles and pairs and test which are more effective against tumours. This will hopefully lead to more specific cancer drugs with fewer side effects."

Pathologists today are also examining the properties of patients' cancer cells in detail.

This allows cancer therapies to be designed in the most personalised and effective way possible.

Annibale hopes that the approach could be now used for screening the effects of different drugs on the function of this and similar receptors.

This could be helpful in devising new therapies for breast, or lung cancer, for example.