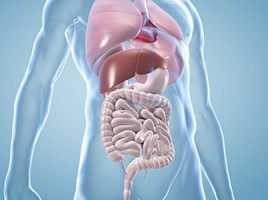 WEHI researchers have identified a key molecular regulator involved in the progression and spread of stomach cancer, suggesting a potential new approach to treat this devastating disease.

The team discovered that removing the inflammatory signalling protein TNF in a laboratory model prevented early stage stomach cancers from progressing to a more severe stage that, in humans, is much harder to treat.

This discovery suggests that stomach cancers may respond to medicines that inhibit TNF. Of note, drugs that inhibit TNF have already shown success in the clinic for certain other diseases, particularly rheumatoid arthritis.

Using a laboratory model, our researchers revealed that the inflammatory signalling protein TNF is required for stomach cancer to develop and progress to an advanced, invasive stage.

This discovery suggests that medicines that inhibit TNF - which are already in clinical use for other diseases - may be an effective new treatment for stomach cancer.

More than one million people around the world - including more than 2000 Australians - are diagnosed with stomach cancer each year.

This cancer is often detected late, at hard-to-treat stages, with fewer than one-third of Australians with stomach cancer surviving for five years after their diagnosis.

Understanding which factors are important for stomach cancer to develop and progress to invasive stages could lead to much-needed better treatments.

To do this, the research team used a laboratory model of stomach cancer that they had developed, Dr O'Reilly said.

"By removing each of the four cytokines that were elevated in our model, we could assess how important each one was.

This revealed that the cytokine TNF was required for the progression of stomach cancer," she said.

The discovery that TNF is a critical driver of stomach cancer development raised the possibility of this cytokine being a potential therapeutic target, Dr Putoczki said.

"Many therapies have shown great promise in treating inflammatory diseases by targeting specific cytokines," she said. "Excitingly, there are already medicines in clinical use that block TNF, most notably for the treatment of rheumatoid arthritis.

"Our research suggests these therapies could be an effective and safe way to prevent the progression of stomach cancer to more severe, invasive forms. This is an area we are looking at in more detail."