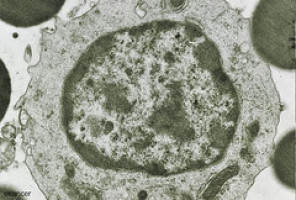 A cancer-killing virus that City of Hope scientists developed could one day improve the immune system's ability to eradicate tumours in colon cancer patients, reports a new study in Molecular Cancer Therapeutics, a journal of the American Association for Cancer Research.

The preclinical research is a first step to showing that City of Hope's oncolytic virus CF33 can target hard-to-treat tumours that "handcuff" the immune system and keep T cells from activating the immune system to kill cancer cells.

More specifically, the researchers demonstrated in mouse models that CF33 appears to increase PD-L1 expression in tumour cells and causes them to die in a way that stimulates an influx of activated immune cells.

"CF33 is a safe, innovative virus City of Hope developed that can become a game changer because of how potent it is and because of its ability to recruit and activate immune cells," said Susanne Warner, M.D., a surgical oncologist at City of Hope and senior author of the study.

"Our oncolytic virus trains the immune system to target a specific cancer cell.

Preclinical models show that a combination treatment of oncolytic virus CF33 with anti-PD-L1 checkpoint inhibition leads to lasting anti-tumour immunity, meaning if a similar cancer cell ever tries to regrow, the immune system will be ready and waiting to shut it down."

Colorectal cancer is the third leading cause of cancer-related deaths in the United States and is expected to cause 53,200 deaths in 2020, according to the American Cancer Society.

City of Hope researchers are excited about the potential of CF33 to enhance colon cancer treatment and point out that CF33 has been effective preclinically against a wide variety of cancers.

Yuman Fong, M.D., the Sangiacomo Family Chair in Surgical Oncology at City of Hope, and his team created oncolytic virus CF33 and expect to open a clinical trial to test the safety of this treatment in human patients in 2021.

This treatment addresses a problem in cancer: Most solid tumours do not respond to checkpoint inhibitors because the "uncloaked tumour cell" still isn't recognised by the immune system, Fong said.

This study demonstrates that a designer virus we created to infect a wide variety of cancers can make tumour cells very recognisable to the immune system," Fong said.

He, Warner and other City of Hope physician-scientists are working on turning "cold tumours" resistant to treatment into "hot tumours" that can be killed by a well-trained immune system.

The U.S. Food and Drug Administration has approved only one oncolytic virus thus far: T-VEC, which is a local immunotherapy treatment that kills melanoma cells.

To confirm their hypothesis, City of Hope scientists tested four groups: control with no treatment, anti-PD-L1 alone, CF33 alone, and a combination of CF33 and anti-PD-P1.

Results indicated that a combined treatment of City of Hope's oncolytic virus and anti-PD-L1 appeared to be most effective.

It also increased CD8 T cells, which are immune cells that remember previous diseases and are trained to kill them if they are reintroduced later.

In other words, the models developed anti-tumour immunity.

This means that animals cured of their cancer were effectively immune to future tumor growth.

Moreover, a recent City of Hope-led study found that CF33 could be combined with chimeric antigen receptor (CAR) T cell therapy to target and eliminate solid tumors that are otherwise difficult to treat with CAR T therapy alone.

City of Hope has licensed CF33 to Imugene Limited, a company developing novel therapies that activate the immune system against cancer.

Notably, the CF33 virus may be tracked by non-invasive PET scanning. "If we can perfect the technique, we can give someone a viral injection and watch it work - see where it goes and identify cancer cells that we didn't even know existed," Warner said.

"Doctors would have real-time data and know if we should give a patient a higher dose or where to direct the treatment based on tumors that have not yet been killed."

What Warner describes is a developing field called theranostic precision medicine, meaning doctors are able to give patients therapies and concurrently diagnose them to provide the most appropriate treatment for that patient.

It is one of many precision medicine approaches City of Hope is developing and offering to patients.

The next step for the current study is to test the innovative CF33 virus platform in different solid tumour models.