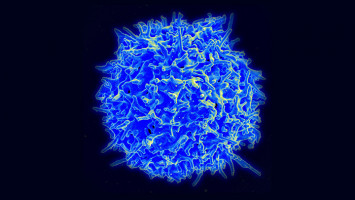 The reprogramming involves a novel approach the researchers developed that inhibits the activity of proteins known as MEK1/2.

The finding appears in Nature Immunology.

"Although immunotherapies have improved survival for cancer patients over recent years, survival rates remain sub-optimal. Therefore, there is an urgent need to develop novel, more effective anti-cancer immunotherapies," says Samir N. Khleif, MD, director of The Jeannie and Tony Loop Immuno-Oncology Laboratory and head of the team that conducted this research.

"Our research shows that using drugs that have already been approved for human use may significantly enhance currently available immune therapeutic approaches, thereby leading to better and more durable anti-cancer responses."

The researchers performed experiments with human cells in the lab and then confirmed the effects of such an approach in mice.

T cell therapy is a process that is widely used in specific cancers and in clinical trials, where immune-system T cells are separated out from a patient's blood, engineered and expanded with special tumour-targeting capabilities and infused back into the patient to fight cancer.

"Stem cell research has played a vital role this century in enhancing the progress against many diseases. Recent public and private support for stem cell therapy is very gratifying," says Khleif. "Having stem cell research-specific funding from both governmental and private funders will greatly help accelerate the development of this under-utilised area of research."

Now that MEK inhibitors have been shown to enhance an anti-tumour immune response, the researchers are starting to look into designing clinical trials to test their research approach in cancer patients.

"Our approach is quite novel and we're anxious to see it put to use in the clinical arena as soon as possible," concludes Khleif.