Scientists discover roles for a cellular motor in cancer 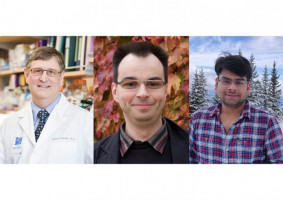 Utah scientists have discovered new functions of a key cellular machine that regulates gene packaging and is mutated in 20% of human cancers.

The study was published in print today in the journal Molecular Cell.

Genes are segments of cellular DNA, and gene packaging is called chromatin.

Genes are tightly packaged when they are not activated and then unpackaged by chromatin remodelling machines when genes need to be turned on.

Mutations in chromatin regulating machines are a significant driver of cancer and other human diseases, as the mutant chromatin regulators improperly unpackage and express genes, which disrupts normal cell growth, identity, and development.

Cairns is a scientist at Huntsman Cancer Institute (HCI) and professor and chair of oncological sciences at the University of Utah (U of U).

The Cairns Lab works to understand how chromatin impacts gene expression in humans and other organisms and provides instructions for cell growth, identity, and development. An important aspect of this work is better understanding the role of chromatin in cancer and other diseases.

The major component of chromatin is nucleosomes, which are similar to beads upon which DNA is wrapped like a string, explaining why chromosomes look like beads on a string under a powerful microscope.

Cairns and colleagues wanted to know how these beads are moved along or removed from the DNA to unpackage and expose genes.

Previous work showed that chromatin remodelling machines have a motor-like component that drives the machine along the DNA, disrupting the nucleosome beads.

The fuel for the cellular motor is called ATP, a chemical produced in cells.

When properly regulated, the motor ensures that the right genes are properly unpackaged.

However, when the motor is misregulated, the wrong genes are unpackaged--and cancer or improper development results.

Cairns's team wanted to understand how the motor of the machine is regulated. "These really are machines: they contain a 'gas pedal' and a 'clutch' that together control whether and how the motor moves the machine along the DNA. This new paper shows the gas pedal and clutch sit right on the motor, and the cancer-causing mutations localise to the clutch and gas pedal itself, making the motor hyperactive and unpackaging genes when it should not."

The work reveals how factors in the cell can activate the machine to do its work at the right place and time.

Cairns and his colleagues used data on mutations in human tumours from the COSMIC cancer database, the largest cancer genomics database in the world, in order to study the human chromatin remodelling machine called BAF/PBAF. BAF/PBAF is mutated in 20% of all human tumours, including pancreatic cancer, gastric cancer, and melanoma.

They studied these human mutations using yeast as a model system.

This analysis revealed a structural hub that tells the motor when to engage (the clutch) and how fast to run along the DNA (the gas pedal), move nucleosomes, and open up genes for their activation. Notably, the team found a series of cancer mutations in an area of the hub that regulates the motor activity and thus ensures proper movement or removal of nucleosomes and proper gene expression.

These mutations in the regulatory hub of the motor created a hyperactive and dysregulated motor that improperly opens up chromatin.

The team's findings shed light on a key regulatory behaviour of healthy cells and explain how a set of cancer-causing mutations promote cancer.