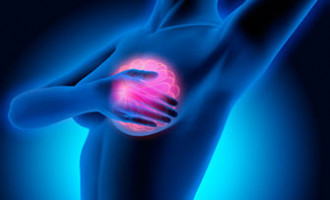 More women could potentially be spared an axillary lymph node dissection -- the surgical removal of 10-20 lymph nodes -- a procedure that causes disabling arm swelling in up to 25% of women, according to a UCLA study led by Dr. Maggie DiNome, chief of breast surgery at the David Geffen School of Medicine at UCLA.

The procedure is currently a standard part of surgical treatment for women with breast cancer that has spread to the lymph nodes to determine the extent of the cancer's spread.

However, the team found that over 40% of women with lymph node involvement at diagnosis have only 1-3 positive nodes at surgery with the remainder of nodes removed being normal.

The team also identified certain features of a patient's tumour -- tumour size, lobular histology and nodal metastasis size -- that can predict which patients may be suitable for omission of this procedure.

Most women with invasive breast cancer are recommended for axillary surgery at the time of their breast surgery.

Axillary surgery is a staging procedure that helps determine whether breast cancer has spread outside of the breast.

Cancer cells can travel directly through the bloodstream to distant organs (bones, lungs, liver, brain) or via the lymphatics.

There currently is no blood test that is able to detect cancer cells in a meaningful way so physicians rely on the lymph nodes to determine whether cancer has started to spread.

A retrospective review from 2010-2019 was conducted of women who had positive lymph nodes at the time of their breast cancer diagnosis and were treated with a complete lymph node dissection at surgery.

The team evaluated this cohort for extent of lymph node involvement on final pathology and whether any variables existed that predicted for higher nodal stage.

This group of women have notoriously been excluded from previous similar studies because of the assumption that these women had extensive spread of breast cancer to the lymph nodes.

Being able to identify women who can be spared an axillary lymph node dissection procedure would be a significant step in improving quality of life.

The researchers say future studies to validate these identified predictors are an important next step.