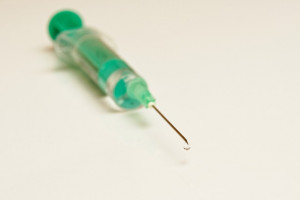 An experimental vaccine, designed to enlist the body’s own immune system to target cancer cells, has shown promise for treating and preventing cancer in mice.

The vaccine was created to target a gene called KRAS that is involved in the development of many types of cancer, including lung, bowel and pancreatic cancer.

Researchers from the same team have also found a new way to spot and treat aggressive forms of lung cancers that are able to evade the body’s immune system.

Both studies will be presented on Sunday at the 32nd EORTC-NCI-AACR Symposium on Molecular Targets and Cancer Therapeutics, which is taking place online.

Scientists have known for decades that the KRAS gene goes wrong – or mutates – in many cancers.

However, until now, researchers have struggled to find a way to turn this knowledge into an effective treatment.

The vaccine study was carried out by Dr Rachel Ambler, a postdoctoral research fellow, and colleagues at The Francis Crick Institute, London, UK. She said: “We know that if KRAS goes wrong, it enables cells in our bodies to start multiplying and turning into cancer cells.

Recently, we’ve learned that, with the right help, the body’s immune system might be capable of slowing this growth.

“We wanted to see if we could use this knowledge to create a cancer vaccine that could not only be used to treat cancer, but also give long-lasting protection against cancer, with minimal side-effects.”

Dr Ambler and her colleagues created a set of vaccines that are capable of stimulating an immune response towards the most common KRAS mutations.

The vaccines are made up of two elements joined together.

One element is a fragment of the protein produced by cancer cells with a mutated KRAS gene.

The other element is an antibody that helps to deliver the vaccine to a cell of the immune system called a dendritic cell.

These cells play a key role in helping the immune system spot and destroy cancer cells, an ability that could be boosted by the vaccines.

The team tested the vaccine on mice that already had lung tumours and mice that were induced to grow tumours.

Researchers studied the mice for indications that their immune systems were responding to the vaccine and for signs that tumours were shrinking or not even forming in the first place.

In mice with tumours, 65% of those treated with the vaccine were alive after 75 days, compared to 15% of mice that were not given the vaccine.

By vaccinating the mice, researchers found that the appearance of tumours was delayed by an average of around 40 days.

Dr Ambler said: “When we used the vaccine as a treatment, we found that it slowed the growth of cancers in the mice. And when we used it as a preventative measure, we found that no cancers grew in the mice for quite a long period of time and, in many cases, cancers never developed.

“Previous trials of cancer vaccines have failed because they have not been able to create a strong enough response from the immune system to find and destroy cancer cells.

This research still has a long way to go before it could help prevent and treat cancer in people, but our results suggest that the design of this vaccine has created a strong response in mice with very few side-effects.”

Researchers from the same team have also made an important discovery about how lung cancers are able to evade the body’s immune system, making them harder to treat.

Their findings will be discussed in two further presentations at the 32th EORTC-NCI-AACR Symposium.

Dr Sophie de Carné, a postdoctoral researcher, and Dr Phil East, deputy head of bioinformatics, from The Francis Crick Institute used a collection of hundreds of human tumour samples with information on which genes are mutated and which genes are active inside the tumours.

They were also interested in the KRAS gene and its role in the development of hard-to-treat cancers.

Dr de Carné said: “In patients with some of the most aggressive cancers, we discovered that the activity of the KRAS gene results in the build up of a chemical called adenosine.

Higher levels of adenosine are known to dampen the body’s immune response, making it harder for immune cells to target and destroy cancer cells.”

The researchers then studied cancers with similar KRAS activity in mice to see whether it was possible to manipulate the levels of adenosine to make it easier to treat the cancer.

By giving the mice a drug designed to lower adenosine, oleclumab made by AstraZeneca, alongside existing cancer drugs that help the immune system fight cancer, the researchers found that they could improve survival.

Dr East added: “Together these results suggest it could eventually be possible to identify patients who have this aggressive type of lung cancer and use a combination of drugs to support their immune system and successfully treat their tumours.”

Dr James L. Gulley is co-chair of the 32th EORTC-NCI-AACR Symposium for the NCI and Director of the Medical Oncology Service, Center for Cancer Research, NCI, USA, and was not involved in the research.

He said: “These studies focus on types of cancer – such as lung and pancreatic cancer – that are difficult to treat.

Survival rates for these cancers remain very poor so we urgently need new treatments for patients.

“Boosting the immune system with drugs to treat cancer or even developing a vaccine to prevent cancer are both exciting possibilities, especially if they can be achieved with minimal side effects.

We hope that these promising approaches will one day be reproduced in patients.”