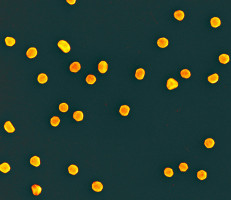 Multidrug resistance (MDR) -- a process in which tumours become resistant to multiple medicines -- is the main cause of failure of cancer chemotherapy.

Tumour cells often acquire MDR by boosting their production of proteins that pump drugs out of the cell, rendering the chemotherapies ineffective.

P-gp is in the cell membrane, where it uses energy in the form of adenosine triphosphate (ATP) to pump drugs out of tumour cells.

Scientists have tried to block P-gp in various ways, such as with small-molecule inhibitors or by depleting ATP.

However, the strategies used so far can cause side effects, or they are unstable in the body.

Some of the treatments can be difficult to prepare.

Previous research suggested that overloading tumour cells with calcium ions could both decrease production of P-gp and reduce ATP levels.

But the team needed to find a way to deliver bursts of calcium, along with a chemotherapy drug, inside cancer cells.

The researchers made a "calcium ion nanogenerator" (TCaNG) by loading calcium phosphate nanoparticles with the chemotherapy drug doxorubicin and then coating them with molecules that would allow TCaNG to target and enter cancer cells.

Once inside cells, TCaNGs entered an acidic compartment, where the TCaNGs disintegrated, releasing both doxorubicin and bursts of calcium ions.

When the team tested TCaNG on cancer cells in a petri dish in the lab, both ATP and P-gp production decreased, which allowed doxorubicin to kill the previously resistant tumour cells.

When tested in tumour-bearing mice, TCaNG-treated mice showed significantly smaller tumours after 21 days of treatment than control mice, with no apparent side effects.