Researchers mine data and connect the dots about processes driving neuroblastoma 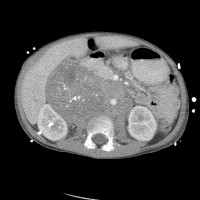 Researchers have used insight from a comprehensive genomic analysis of neuroblastoma to learn about the process driving one of the most common childhood solid tumours.

The tumours included 23 samples from patients who relapsed.

"This combined analysis of a large cohort of tumours provided insight into previously unrecognised correlations at work in neuroblastoma as well as the discovery of less common driver mutations," said corresponding author Jinghui Zhang, Ph.D., chair of the St. Jude Department of Computational Biology.

The co-corresponding authors are Michael Dyer, Ph.D., chair of the St. Jude Department of Developmental Neurobiology and a Howard Hughes Medical Institute investigator, and Michael Hogarty, M.D., of the Children's Hospital of Philadelphia.

Connecting the dots between common mutations and oxidative stress

Researchers used a common mutational pattern almost like a fingerprint to identify internal processes fueling the tumour's growth and spread.

Reactive oxygen species are generated in the mitochondria of cells.

The analysis found an association between a chromosomal mutation in 65% of neuroblastomas and the DNA-damaging molecules.

These tumours have an extra piece of chromosome 17.

That piece includes genes expressed in the mitochondria.

A St. Jude Cloud search of more than 1,000 pediatric tumour genomes from 39 cancer types found the association was not unique.

Researchers reported that more than 20% of samples from another cancer, rhabdomyosarcoma, had increased expression of mitochondrial genes and a pattern of increased oxidative stress.

The finding strengthened the newly identified connection between mitochondrial gene defects and the mutational process.

"Thanks to this analysis, we have a deeper understanding of the alterations driving neuroblastoma, including how tumours form, progress and respond to therapy," Dyer said.

"That is the foundation for translational research going forward."

While 7 to 10% of childhood cancers are neuroblastoma, the tumour accounts for half of all cancers in infants.

This cancer generally begins in the adrenal glands, but it can also start in the chest, the spine or spinal cord regions, abdomen and other areas.

Treatment and outcomes vary widely based on patient age.

Survival rates for the youngest patients (younger than 18 months old) are about 95%.

For older, high-risk patients, survival rates are only about 50%.

This study reinforced the association between patient age and the mutations driving the disease.

For example, the genes MYCN and TERT were commonly altered in patients 3.8 years of age or younger while mutations in ATRX were more frequent in children with a median age of 5.6 years.

MYCN, ATRX and a "beautiful convergence"

The analysis offered insight into previous research from Dyer and his colleagues.

The researchers noted that while MYCN or ATRX were potent drivers of neuroblastoma, the mutations did not occur together.

"In most cancers, you would expect to find patients with both mutations who did even worse," Dyer said. "But we never found this combination, which was a surprise."

Dyer hypothesized that, when combined, the mutations may be lethal to tumor cells.

"This was a beautiful convergence of two different approaches to understanding the mutational processes underway inside cells," he said.

The large number of samples aided efforts to find recurring, but less common neuroblastoma alterations that may be candidates for precision medicines.

The newly identified mutations were in the genes FGFR1 and ALK.