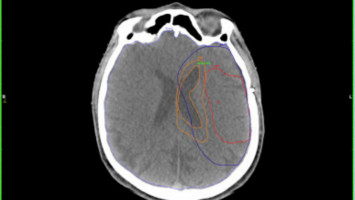 Houston Methodist researchers found that mice harboring human glioblastoma tumours in their brains had greatly enhanced survival and weight gain when given a newly developed prodrug.

This mitochondrial-targeted prodrug - an inactive compound that cancer cells selectively metabolise to produce an active toxic drug - also greatly improves outcomes when coupled with standard therapies of radiation and/or chemotherapy.

The drug selectively targets and destroys the DNA inside the glioblastoma cell mitochondria (the energy factory of the cancer cell) leaving normal cells intact.

In an Oct. 8 study published online in Molecular Cancer Therapeutics, a journal of the American Association for Cancer Research, investigators used a second generation prodrug called MP-Pt(IV) to target the deadly cells of glioblastoma tumours, a brain cancer that is almost always fatal and has no cure.

Life expectancy in humans with glioblastoma ranges from a few months to two years.

Human glioma cells were removed from patients during surgical excision and isolated within 10 minutes after removal.

The glioblastoma cells were injected into the brains of 48 female mice for a 300-day study.

The prodrug was well tolerated, and, when given on its own, extended survival by more than a factor of three.

However, when combined with standard chemotherapy and radiotherapy, the drug was curative in nature, allowing 90% of mice to survive, thrive and gain weight during the 10 months of observation.

"This study tells us that adding MP-Pt(IV) to a chemoradiotherapy protocol could address a critical need in glioblastoma treatment," said David S. Baskin, M.D., FACS, FAANS, corresponding author and director of the Kenneth R. Peak Center for Brain and Pituitary Tumour Treatment in the Department of Neurosurgery at Houston Methodist.

"We now know that MP-Pt(IV) is an excellent candidate for preclinical development."