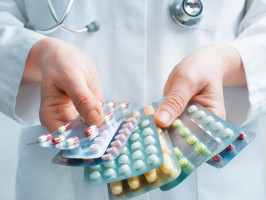 The European Society for Medical Oncology (ESMO) congress was held virtually from 19 to 21 September, 2020.

A brief summary of selected researches is presented.

GISTs are driven by various primary and secondary oncogenic mutations.

Approximately, 75% of PDGFRA-mutated tumors results in an exon 18 D842V substitution.

This mutation is highly resistant to all currently approved kinase inhibitors (TKI).

As reported in the lancet by Michael Heinrich and colleagues, the results of phase I NAVIGATOR (NCT02508532) trial have shown antitumour activity of Avapritinib in patients with advanced GISTs harboring PDGFRA exon 18 mutation including D842V, and a tolerable safety profile.

These results led to the US Food and Drug Administration approval of avapritinib in patients with exon 18 PDGFRA- mutant GISTs.

This year in ESMO annual meeting, updated results on long-term efficacy and safety in PDGFRA D842V-mutant GISTs were presented with data as of March 9; 2020 and a median follow-up of 26 months.

The dose expansion part (300/400 mg) included patients with unresectable PDGFRA D842V mutant regardless of previous therapy (n=36), or GISTs with other mutations that only received imatinib (n=42) or that progressed on imatinib and one or more TKI (n=126).

The maximum tolerated dose was 400 mg and the recommended phase 2 dose was 300 mg.

In the D842V population, the median age was 64 (25-90), 70% were men, and the majority of patients had metastatic disease and large tumours.

Two of the 5 TKI naïve patients achieved a CR and 3 had a PR.

The safety profile in PDGFRA D842V mutant patients was similar to the overall study population.

Many of these events are reported with other TKI, nevertheless neurological toxicities require a careful evaluation in the future.

No drug-related deaths were reported.

According to these results Avapritinib should be considered the new standard of care in first line setting for patients with unresectable/metastatic PDGFRA D842V- mutant GISTs.

Adverse events are manageable, however, a close monitoring for central nervous system toxicities with appropriate dose reduction is required.

Updated PFS, OS, and safety profile in the placebo-controlled phase III INVICTUS trial were presented during the mini-oral session4.

In this trial 129 patients who have progressed on 3 or more TKI including imatinib or are intolerant to multiple TKI were randomised (2:1) to Ripretinib, a novel TKI that targets multiple Kit and PDGFRA mutations, 150 mg once daily or placebo.

Upon disease progression, patients on placebo could cross over to Ripretinib.

The safety profile was favorable and consistent with the previous results.

The increase in treatment emergent adverse events (TEAE) and the number of new TEAEs leading to dose modification or death was minimal.

Ripretinib 150 mg once daily is currently approved by the FDA for fourth line or further line therapy for advanced GISTs.

According to presented data, Ripretinib continues to provide clinically meaningful benefit with no additional safety concerns after additional 9 months follow-up.

A significant improvement in OS as compared with the group receiving placebo despite a crossover design suggests the importance of an early Ripretinib treatment in this patient population.

A PFS benefit from increasing dosage of Ripretinib was observed in patients across all lines of therapy (table 1).

A substantial proportion of patients do achieve a prolonged PFS on 150 mg BID.

Anemia and dyspnea were reported in ≥10% of patients receiving 150 mg BID.

Escalation to Ripretinib 150 mg BID should be investigated in the future as new therapeutic option in patients progressing under standard dose of Ripretinib.

Predictive markers are needed to better define the period and the group of patients benefiting from dose escalation.

There are several molecular mechanisms underlying secondary resistance in GISTs and their inhibition may require different drug levels.

However, the additional efficacy of dose escalation may not necessarily relate to overcoming resistance, but drug clearance mechanisms.

More researches are required to investigate the correlation between the plasma levels and outcome.

Based on this study results, a randomised trial comparing the two doses; 150 mg QD versus 150 mg BID could be interesting to explore whether a higher dose of Ripretinib may provide better clinical outcome in patients with advanced GISTs.

Patients ≥15 years, ECOG ≤1 with advanced disease that was resistant to standard treatment or with no alternative treatment options were eligible.

The primary endpoint was ORR according to RECIST v1.1 measured at least at day 84 /- 7 days. and secondary endpoints were clinical benefit rate, best response, DOR, PFS, OS and safety.

Pembrolizumab was administered at 200 mg every 21-day up to progressive disease or unacceptable toxicity or for a maximum of 2 years.

ORR was 6% according to the study definition and 15 % if any time (best response).

Survival rates also varied by histotype (p=0.013) with a better PFS chordoma, ASPS, and DSCRCT as compared to other histotypes.

Median OS was significantly better in chordoma, and ASPS cohort as compared to other histotypes.

Of the 7 grade 3 or 4 TRAEs, 4 results in treatment withdrawals and 2 treatment interruption.

Results of immunotherapies in sarcomas, specifically those based on immune checkpoint inhibitors, have been inconsistent across studies (table 2).

It is difficult to compare these different trials as they included different subtypes.

Nevertheless, the ORR achieved by single agents in all these trials was < 20%.

Combinations should be investigated.

However, it is clear that patients with certain sarcoma subtypes responded and we need to pursue the early leads in activity found in these histotypes.

Translational researches from biopsy specimens, blood, and stool collected from the current study and other studies will help to understand the sarcoma immune microenvironment, and characterise the determinants of response immunotherapy in sarcoma.

To date, in the absence of predictive biomarker for check point inhibitors, we should select by histology.

Safety and preliminary efficacy analysis of trabectedin combined with the PDL1 inhibitor durvalumab in a cohort of 16 patients with unresectable or metastatic soft tissue sarcomas treated in phase phase Ib TRAMUNE trial; NCT03085225, were reported.

3 doses of Trabectedin (1 mg/m²; 1.2mg/m²; 1.5mg/m²) given in combination with Durvalumab (fixed dose 1120 mg on day 2 of each cycle, every three weeks) have been investigated in the dose escalation phase.

Only 1 dose-limiting toxicities (DLT) was observed at the level 2 dose from the dose-escalation phase of the study.

The DLT was grade 4 hepatic cytolysis and was observed on day 8 of cycle 1.

The dose-expansion phase identified the maximum tolerated dose (MTD) of trabectedin to be 1.2 mg/m2 given over 3 hours on day 1 of each cycle every 3 weeks.
After a median follow-up of 10.7 months, 16 patients were assessable for safety and 14 for efficacy.

Most frequent TRAEs were grade 1-2 nausea and fatigue.

The most common grade 3-4 AE were hepatic cytolysis and neutropenia, as expected.

There were 2 grade 5 AE including multi-organ failure and febrile aplasia.

Expression of immune markers PDL1, CD8, and CD163 on baseline has been assessed.

The results showed, low expression of PD-L1 and CD 8. CD8 and CD163 correlated with cell density as well as PFS.

When co-staining of CD163 and CD8 was carried out, investigators noticed 3 clusters of markers, including immune desert tumors, those high in CD163, and those high in CD8.

Considering the design of the study, which required at least one objective response to consider the combination active, the study was overall positive.

The lack of higher activity may be due to the scheduling of the two agents.

Trabectedin was used at lower dose (1.2 mg/m2) than the activity threshold, the infusion period was of 3 hours, and the use or not of steroids was not entirely clear.

Also, the combination resulted in significant toxicities that can prevent higher efficacy.

There is a substantial background for the combination of Trabectedin and anti PD1/PDL1 agents, however due to the safety profile, the development of this combination may be difficult.

Higher efficacy and favorable toxicity profile may require other scheduling and selected population.

Two presentations of promising novel therapies in patients with recurrent Ewing sarcoma, a population with limited or no treatment options, are selected.

TK216 is the first agent to target ETS oncoproteins.

Data from first-in-human phase I study of TK216 in recurrent/refractory Ewing sarcoma were presented.

Patients received 200 mg/m2/d for up to 14 days infusion with a 14-day break to complete a cycle.

Vincristine (VCR) could be added to treatment after cycle.

15 patients treated at RP2D were evaluable for response.

2 patients achieved a CR (including one surgical complete response), and 5 had stable disease.

No new toxicities were noted except neurotoxicity due to VCR.

TK216 is very early in development, more investigations are warranted to achieve better understanding of the mechanism of response and non-response, activity by translocation partners, and by disease stage.

It is probably the first step for treatments that target transcription factors.

Extension for other cancer types that contain related fusion proteins as a result of similar chromosomal translocations is possible.

Regorafenib: signals of benefit for patients with recurrent and refractory Ewing sarcoma

Results from bone Ewing sarcoma cohort were presented during the proffered paper session.

36 patients were evaluable for response.

These results are consistent with findings from SARC024 trial.

One toxic death due to thrombocytopenia has been reported.

Although formally negative, a prolonged PFS was observed in patients receiving regorafenib suggesting a clinical benefit in this population with a major unmet need.

Further investigations including combinations studies, maintenance therapy, and correlative biomarkers studies are need to translate these signals of benefit into improved outcome.

Although none of the studies presented 2020 ESMO virtual meeting in the field of sarcoma are revolutionary, valuable data that add important information to the overall picture were presented.

In addition, early phase clinical trials with novel agents such as TK216 in Ewing sarcoma or immunotherapy in soft tissue sarcomas indicate the future directions of drug development in this rare and heterogenous disease.

• Avapritinib is the new standard of care for unresectable and or metastatic GISTs with PDGFRA D842V mutation.

• Ripretinib given in ≥ 4th line setting continues to provide clinically meaningful benefit for patients with refractory advanced GIST with no emerging safety concerns after additional 9 months follow-up in INVICTUS trial.

• The combination of trabectedin and durvalumab yielded limited activity in patients with advanced soft tissue sarcomas with a substantial toxicity.

• REGOBONE trial did not meet its primary endpoint in the Ewing sarcoma cohort, however a promising signal of benefit in patients receiving regorafenib is observed.