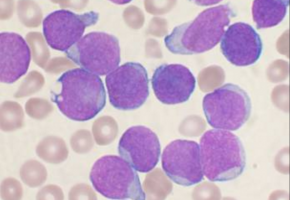 Skipping radiation and receiving less chemotherapy may become the new standard of care for some lymphoma patients, according to a recent collaborative study led by a Daniel Persky, MD, associate director for clinical investigations at the UArizona Cancer Center, principal investigator of its Lymphoma Clinical Research Team, and professor of medicine in the Division of Hematology and Oncology at the UArizona College of Medicine - Tucson.

The study aimed to improve treatment for patients with Stage I or II (limited stage) diffuse large B-cell lymphoma, the most common type of non-Hodgkin's lymphoma in the United States.

Non-Hodgkin's lymphomas are cancers of lymphocytes, a type of white blood cell that helps protect the body from infection and disease.

The disorder accounts for almost 40% of non-Hodgkin's diagnoses and is usually a fast-spreading cancer, but one that is potentially curable.

In some cases, DLBCL can be treated with a chemotherapy combination of drugs known as R-CHOP.

Patients then undergo three cycles of the chemotherapy followed by radiation, or complete six cycles without radiation.

In the new study published in July in the Journal of Clinical Oncology, research suggests radiation is not needed for many patients.

Instead, it suggests using a positron emission tomography (PET) scan after three cycles of R-CHOP.

If the patient's scan is negative, they can proceed with one additional round of R-CHOP to complete their treatment.

Dr. Persky was the lead investigator for the study conducted by the SWOG Research Network, a cancer clinical trials network funded by the National Cancer Institute.

Results showed that 91% of people who received no radiation were alive five years after treatment, and 89% were cancer-free.

The study is promising for reducing unintended harmful effects that can be caused by radiation and chemotherapy, such as R-CHOP, in patients.

These effects are particularly concerning for older patients who may be suffering from, or at risk of, other health conditions as they age.

Therefore, reducing the toxicity of their cancer treatments can have significant health benefits and improve their quality of life.

"We serve this population, and tolerance to the treatment is important to them," Dr. Persky said.

"It is much easier to get an older patient through four cycles of R-CHOP than it is through six."

In the study, patients with a positive PET scan did not proceed with additional rounds of R-CHOP.

Instead, they underwent radiation therapy and a booster treatment in areas where the scans showed rapidly growing cancer cells.

These patients then received treatment with a radioimmunotherapy drug, ibritumomab tiuxetan, that is not yet FDA approved for DLBCL, but is approved in other types of lymphoma.

"The interim PET positive group were those at greater risk of relapse or recurrence of their cancer," Dr. Persky said.

"This group also did really well in the study."

The findings may be significant for patients diagnosed with this disease in the future.

"This can be the new standard of care for limited stage DLBCL patients," Dr. Persky said.

"Many patients can forgo radiation and receive less chemotherapy while still getting excellent results."