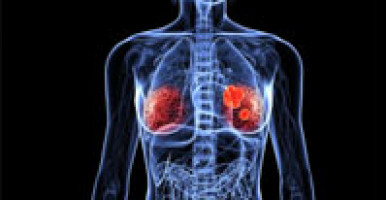 Thermal imaging has been available for decades to detect temperature differences on the skin that could signal breast cancer without exposing patients to radiation, although the method is not as reliable as mammography.

Engineers in the Erik Jonsson School of Engineering and Computer Science, working with radiologists at UT Southwestern Medical Center, recruited 11 female patients who volunteered for the study through UT Southwestern and Parkland Health & Hospital System in Dallas.

The team used a high-resolution infrared camera, clinical data from patient volunteers, 3D scanning and computer-aided design to build a proof-of-concept computer model of the thermal properties of breast cancer.

Dr. Fatemeh Hassanipour, corresponding author of the study and associate professor of mechanical engineering in the Jonsson School, said their goal is to improve digital thermal imaging as a tool for monitoring cancer and its treatment, rather than replacing cancer screening by mammograms.

"Infrared imaging could potentially provide useful information in a diagnostic setting to radiologists," Hassanipour said. "We want it to be used like a second device for monitoring tumours."

The research utilised thermal imaging, with the infrared camera taking images of the skin, to identify temperature changes generated by breast cancer as it induces changes to the local vasculature and cellular metabolism.

The technique only shows patterns of heat and blood flow on or near the surface of breasts, however, leaving unknown information about tumour activity deeper in the breast tissue.

The UT Dallas researchers worked to address this issue by applying engineering tools to imaging data to develop a model that quantifies the thermal characteristics of breast cancer throughout one patient's breast.

The results showed a detectable temperature difference in metabolic heat generation between the patient's normal and cancerous breasts.

They also noted increased perfusion rates, which is the rate of blood flow through a given volume, in the affected breast.

The researchers cautioned that the model cannot be applied to all types of breast cancer.

In addition, not all breast cancers generate sufficient heat to be detected via thermography.

Now that UT Dallas researchers have demonstrated their computational model, they plan to develop models for the other breast cancer patients enrolled in the study.

"Our team has many great ideas moving forward," Hassanipour said. "We'd like to add more dedicated graduate students to this project. The subject case that we reported in the manuscript was a proof of concept. A lot of lessons were learned that will facilitate modelling other cancers."

Lozano said he was eager to join Hassanipour's breast-cancer research project because his mother was diagnosed with breast cancer in 2009.

"I still recall hearing the news and how shocked and saddened we were as a family," said Lozano, whose mom's cancer is in remission. "When I had the opportunity to join Dr. Hassanipour's research group and establish this new project in the area of breast cancer, I was immensely grateful and saw it as a gift from above."

Hassanipour's work is supported by a National Science Foundation CAREER award, which she received in 2015 to study the biomechanics of breastfeeding.

She said she became interested in the thermal imaging project after discovering that little work had been done to create a thermal model of the breast based on real clinical data.

Source: University of Texas at Dallas