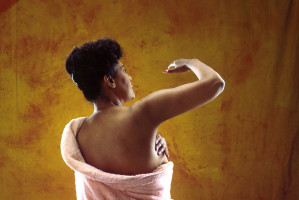 Taking advantage of a cancer cell's altered metabolism that drives its runaway growth, Princess Margaret researchers are zeroing in on these molecular changes to help them develop more precise drug targets for one of the most deadly breast cancers.

In addition, it has a higher metastatic rate within five years of diagnosis and poorer overall survival rate compared to receptor positive cancer subtypes.

Scientists don't know why, but this cancer is also more common among Black and younger women.

"This disease has no precision medicine," says Dr. Mathieu Lupien, Senior Scientist, Princess Margaret Cancer Centre, "so patients are treated with chemotherapy because we don't have a defined therapeutic target.

Initially, it works for some patients, but close to a quarter of patients recur within five years from diagnosis, and many develop chemotherapy-resistant tumours.

"These savage statistics mean that we must improve our understanding of the molecular basis for this cancer's development to discover effective, precise targets for drugs, and a companion test to identify which patients are most likely to benefit the most from such a therapy."

In research led by Princess Margaret Senior Scientists Drs. Cheryl Arrowsmith and Mathieu Lupien published in Nature Communications, August 21, 2020, the scientific team found a promising approach with a protein biomarker that could potentially identify the best patients for more precise, targeted therapy in the future.

They found a correlation or link between cells with varying levels of RB1, a protein involved in cell metabolism, as well as a long-established tumour suppressor protein, and decreased growth in these cancer cells.

All cancers have altered metabolic states, explains Dr. Arrowsmith, because their explosive growth requires huge amounts of energy, such as glucose, to nourish their survival and growth - despite being bombarded with chemotherapy in this specific cancer.

Having access to diverse cell models of triple-negative breast cancer allows us to distinguish where the potential drug will work, and where it won't, says Dr. Lupien, who is also an Associate Professor in the Department of Medical Biophysics.

"Without this broad spectrum of samples, we might have missed the subset of triple-negative breast cancers that respond to our compound."

Specifically, the compound targets GLUT1, part of the pathway transporting glucose into a cell to increase metabolic energy in the subset of cancer cells with high levels of RB1 protein- in effect stopping them from growing.

Blocking this pathway "starved" the cancer cells, making them more responsive or sensitive to the chemical compound, demonstrating this as a promising target for new anticancer approaches.

This work shows that differing levels of RB1 can be used as a biological biomarker to discriminate between treatment responders and non-responders in the future, says Dr. Arrowsmith.

Matching the right patient to the right drug is a major challenge in cancer research and treatment, says Dr. Arrowsmith, who is also Chief Scientist for the Structural Genomics Consortium Toronto laboratories and Professor of Medical Biophysics at the University of Toronto.

She points out that multiple changes in cancer cells drive their abnormal growth, including genetic, epigenetic, metabolic and chromosomal changes that mutate and change over time.

This heterogeneity in tumour cells, which is constantly changing and adapting over time, enables cancer cells to thrive and evade conventional therapies.

That's why many new potential drugs fail, says Dr. Arrowsmith, because these multiple combinations of changes in cancer cells are complex and dynamic.

"What we're trying to do is to understand in detail what subset of drugs are effective at targeting the minute molecular changes in the cancer cells.

"It's like whack-a-mole when you try and treat cancer with one drug. As soon as you figure out how to stop a mechanism that drives the cell rogue, the cancer cells adapt and keep on growing.

"That's the big challenge in treating cancer. The more we understand about the molecular complexity of cancer cells, the more we can target with precision.

"And the more we can build up a pharmacy of cancer drugs matched to specific changes in the cancer cell, the greater the chance of a cure."