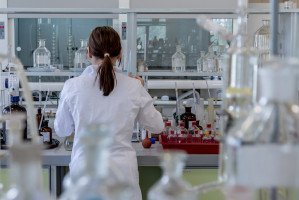 Scientists have created a rapid and affordable test for breast cancer that is designed for use in developing regions, where patients often face delayed diagnoses that worsen their outcomes.

The diagnostic showed an initial accuracy of 100% when tested in a small group of 68 patients, and could yield repeated results in less than 1 hour.

Although more testing with large patient groups is necessary, the technique's speed and ease-of-use could help clinicians in resource-limited settings overcome barriers to rapid cancer diagnosis.

Spotting cancers early on is challenging enough in developed countries, but it can be even more difficult in low- and middle-income countries, where more than two thirds of deaths from cancer occur.

Due to the lack of medical infrastructure and healthcare specialists, diagnoses can be delayed for months and often come only after a patient has developed advanced disease.

To address the need for new cancer tests, Jouha Min and colleagues harnessed image cytometry, a technique that images and analyses individual cells for malignancy.

In a validation study in South Korea, CytoPAN could be applied to 63 of 68 patients with breast cancer and spotted cancers with an accuracy of 100%, using as few as 50 cells per specimen.

The test also spotted ER/PR and HER2, key cancer biomarkers, with an accuracy of 93% and 96%, respectively.

The method offers several features for usability and affordability: it yields results quickly, integrates a simplified workflow that requires minimal training, and uses test kits with an estimated cost of only $5, more than five times cheaper than current diagnostics.

The authors say future trials should test CytoPAN with a wider range of biomarkers and in other regions such as sub-Saharan Africa, where women with breast cancer face additional risks such as HIV infection.