Changes to gut microbiome may slow cancer growth in smokers 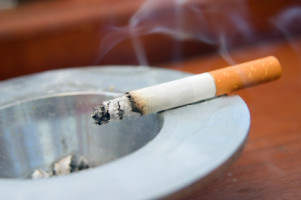 Changes to the gut microbiome interacted with the immune system to slow the growth of cancer in mice exposed to cigarette smoke, according to research that was selected for presentation at Digestive Disease Week® (DDW) 2020.

DDW® data will be published in the May online supplements to Gastroenterology and GIE: Gastrointestinal Endoscopy.

"If the same relationship is found in human studies, treatments that modify the gut microbiome could improve cancer outcomes for smokers, who are susceptible to many cancers and fare worse in cancer treatment," said Prateek Sharma, MBBS, post-doctoral associate at University of Miami Miller School of Medicine, Florida, and a lead author in the study.

Previous studies have shown that the gut microbiome plays a role in the progression of cancer.

To learn more about the specific relationship between smoking and the gut microbiome, researchers randomised mice into four groups: a control group getting only saline solution, a group receiving antibiotics alone to sterilise the gut, a smoking group pre-exposed for four weeks, and a group with both smoke exposure and antibiotics.

All groups were injected with cancer cells.

Cancer tumours were measured as the cigarette smoke exposure continued in the smoking groups for two months.

But when the gut microbiome was depleted with antibiotics in smoke-exposed mice, the cancer promoting effect of smoke disappeared.

In fact, cancer growth in smoke-exposed mice with gut-clearing antibiotics was similar to the group with the slowest progressing cancers -- the mice with antibiotics and no smoke exposure.

The same experiment was conducted using mice that were genetically engineered to lack an adaptive immune response.

In those mice, changes to the microbiome did not slow the cancer growth rate when exposed to smoke.

This finding suggests that the interaction of the microbiome with the immune system influences cancer growth.

Future research could explore whether this relationship exists in human subjects and identify which specific "bad" bacteria in the gut of smokers have an impact on the immune system and cancer growth, Sharma said.

This could involve eliminating bacteria with antibiotics or introducing specific bugs through probiotics or faecal microbial transplantation.

The research was funded by James and Esther King Biomedical Research Program (9JK07), which is a state grant by the Florida Department of Health awarded to Vikas Dudeja, MD, associate professor of surgery at University of Miami Miller School of Medicine, who is the principal investigator of this study.