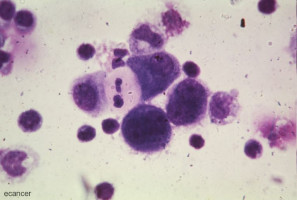 Analyses of cell signals provide insight into the origin of severe inflammatory symptoms that appear in various types of blood cancer and point to possible therapeutic approaches: In around one-fourth of patients suffering from juvenile myelomonocytic leukaemia (JMML), there is evidence of mutations in the so-called KRAS gene in the leukaemia cells.

Patients affected by JMML carrying these mutations suffer particularly often from signs of inflammation, such as fever, weight loss, and an abnormal enlargement of the spleen. It was previously unknown how the sometimes severe inflammatory symptoms are connected with the cancer.

A team of researchers at the University of Freiburg led by Prof. Dr. Robert Zeiser and Prof. Dr. Tilman Brummer has now demonstrated that the cancer-causing mutation in the KRAS gene is also the cause of the inflammation.

The improved understanding of the symptoms will enable doctors to develop new drugs for blocking the progression of leukaemia in the body.

The KRAS gene regulates the production of the K-Ras protein, which gives the cells instructions to grow or to divide.

The protein ensures that cells only multiply if new cells are needed in the body.

If K-Ras is excessively active in some cells due to a mutation in the genetic material, these cells divide unchecked - and cancer develops.

Zeiser and his team have now discovered that K-Ras also plays an important role in the immune response: Via the NLRP3 protein complex - also known as the NLRP3 inflammasome - it leads to the release of two inflammation-promoting messenger substances, interleukin-1β and interleukin-18, which the researchers succeeded in detecting in cells from blood samples of leukaemia patients.

When the researchers inhibited the formation of the messenger substances with drugs, this treatment not only relieved the inflammatory symptoms but also slowed down tumour growth.

"This is a promising result that is also consistent with other studies demonstrating that cancer-causing mutations influence the production of interleukin messengers," explains Zeiser.

The results of the study show that the signalling pathways whose disruption leads to cancer are also directly related to the signalling processes of the immune response.

Tilman Brummer conducts research at the University of Freiburg's Institute of Molecular Medicine and Cell Research. One of the objectives of the Cluster of Excellence CIBSS - Centre for Integrative Biological Signalling Studies is to better understand how different signalling processes in the immune and tumour cells are interconnected.

In the cluster, Zeiser and his colleagues from various disciplines are studying how molecular signals function in the body and how this can be used as a basis for developing therapies.