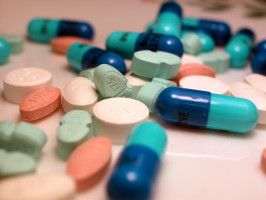 Older patients with prostate, breast, or lung cancer are more likely to be hospitalised after chemotherapy if they take more than five other medicines.

As adults age, they accumulate a number of medications for chronic conditions.

Older patients take anywhere between 5-15 medications per year, which increases the risk that some of the drugs will counteract each other.

What happens when cancer therapy is added onto an already full plate of medications?

In the largest retrospective population-based study to date, Jefferson researchers showed that hospitalisation increase by as much as 114% in patients battling breast, prostate, and lung cancers, when those patients took 15 or more medications prior to chemotherapy treatment.

"The comprehensive real-world data we looked at gives us a sense of what's happening today, and offers clues on how we could reduce hospitalisations in older cancer patients," says senior author Grace Lu-Yao, PhD, associate director of Population Science at the Sidney Kimmel Cancer Center (SKCC)--Jefferson Health.

The study was published in the Journal of Geriatric Oncology.

"The older patients get, typically the more complex their care becomes - this is especially true when cancer treatment is combined with pre-existing conditions," says co-author Andrew Chapman, DO, co-director of the Senior Adult Oncology Center and chief of Cancer Services at the SKCC.

The researchers identified a pool of 13,959 patients with prostate, lung, and breast cancer from a national database of Medicare cancer patients.

They grouped patients by the number of medicines they were on for the 6-months prior to starting intravenous chemotherapy for their cancer.

"By looking at hospitalisation rates in the 6-months leading up to the start of chemotherapy, we were able to get a baseline, or 'before' data point for these patients, that we could compare against the rates of hospitalisation after chemo," said Dr. Lu-Yao.

Drug-drug interactions - where one drug can reduce the effectiveness of another and cause dangerous accumulations of another drug or other effects - are nearly a certainty when people take over eight medicines at once.

The researchers saw that the cancer patients studied were starting at a high number of medications already.

"Polypharmacy, defined as patients taking 5 or more medications, is a serious problem in patients," says Ginah Nightingale, PharmD, an associate professor in the College of Pharmacy at Thomas Jefferson University, who is an emerging leader in the field of geriatric polypharmacy. "Older patients see multiple specialists, and those specialists rarely coordinate with each other to ensure that the medications are absolutely essential, or weighed against a patient's priorities. So patients end up accumulating more than they absolutely need to take."

The researchers saw similar increases in both breast and prostate cancer patients as well.

"The question is whether we can work with patients and their multiple healthcare providers to de-prescribe medicines that might no longer be essential and may interfere with their cancer care," says Dr. Nightingale. "We are in the process of designing a randomised study to test whether we can improve cancer-patient outcomes by reducing the number of medications in the older population of patients."