DOT1L inhibition is lethal for multiple myeloma due to perturbation 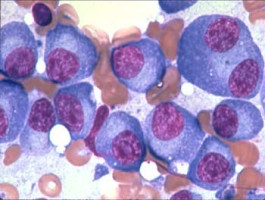 A study published in the journal Oncotarget has reported that in order to understand the molecular mechanism of the dependency in MM, the research team examined gene expression changes upon DOT1L inhibition in sensitive and insensitive cell lines and discovered that genes belonging to the endoplasmic reticulum stress pathway and protein synthesis machinery were specifically suppressed in sensitive cells.

Whole-genome CRISPR screens in the presence or absence of a DOT1L inhibitor revealed that concomitant targeting of the H3K4me3 methyltransferase SETD1B increases the effect of DOT1L inhibition.

The sensitivity of MM cells to proteasome inhibitors is thought to be due to perturbation of the hyperactive UPR, which may offer some degree of selectivity versus non-cancerous cells.

Through pharmacologic and genetic approaches, we found that inhibition of DOT1L, an H3K79 methyltransferase, profoundly reduces the viability of a subset of MM cell lines in vitro and inhibits the growth of established MM xenografts in mice.

The Tiedt Research Team concluded: "Our discovery indicates a novel opportunity for DOT1L inhibitors in cancer treatment. Concomitant targeting of SETD1B enhances phenotypic and transcriptional effects of DOT1L inhibition in sensitive MM cell lines, which may be an additional therapeutic angle. To our knowledge, no selective SETD1B inhibitors have been described yet, and our data questions whether its methyltransferase activity is critical in the MM context. Additional work is needed to address this question and guide drug discovery."