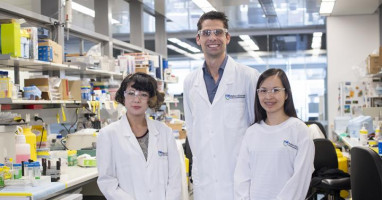 A revolutionary new technology has been applied to reveal the inner workings of individual cancer cells - potentially identifying more effective treatment combinations for people with cancer.

This revealed how these cells responded to different anti-cancer medicines, even suggesting potential new treatment combinations.

The research team hope that the new technique could be integrated into clinical trials both to understand why some patients are resistant to anti-cancer therapies, and to predict suitable 'biomarkers' for matching patients with the most effective therapies for their disease.

The study was led by Walter and Eliza Hall Institute researchers Dr Charis Teh and Associate Professor Daniel Gray, in collaboration with Professor Garry Nolan and Dr Melissa Ko from Stanford University, US.

Cancers are made up of millions of individual cells which are all similar, but not exactly the same.

Until recently almost all studies of cancers looked at the cells grouped together, missing any potential differences between individual cells, said Dr Teh.

"We wanted to better understand the molecular differences between individual cancer cells so we could discover how these differences impact the cancer's response to therapies - for example, whether some cells are more resistant than others to an anti-cancer drug," Dr Teh said.

"We decided that a new technology, called mass cytometry, would be an ideal approach to address this question."

Mass cytometry can simultaneously measure the quantity of different proteins in a single cell.

With funding support from the Australian-American Fulbright Commission, Dr Teh was able to visit Stanford University to learn the technology and develop a test that measures a range of proteins known to regulate cancer cell survival, division, signalling and growth.

"The system we developed simultaneously and precisely measures 26 separate proteins in a blood cancer cell line derived from myeloma - an incurable cancer of immune B cells," Dr Teh said. "We focussed on understanding why some cells are sensitive to anti-cancer agents, while others are resistant.

"We used machine learning to analyse the mass cytometry results of thousands of cells, and were able to distinguish which cells survived treatment with standard medicines used to treat myeloma - and see how they differed from cells that were sensitive to these medicines," she said.

The team pinpointed the protein MCL-1 as a key factor determining whether cells lived or died when exposed to the myeloma medicines dexamethasone or bortezomib. MCL-1 is a type of protein that can prevent cell death when overproduced in cancer cells.

"Excitingly, there are already drugs in clinical trials that inhibit MCL-1 - and when we tested these against myeloma cells, we found the MCL-1 inhibitor made the cells more sensitive to dexamethasone. This was even the case in myeloma samples taken from a patient - our system had identified a potential new therapeutic approach for myeloma," Dr Teh said.

Mass cytometry may even have a role in providing real-time detailed analysis of patient samples from clinical trials, Associate Professor Gray said.

"The panel of markers developed in this study gives researchers considerable scope to understand how cancer cells are responding to anti-cancer therapies - and as we found, it can even help to identify better drug combinations," he said.

"Adding mass cytometry to the analysis of clinical studies could reveal why some patients respond to therapies differently from others, and how resistance to anti-cancer medicines can develop in a small fraction of cancer cells.

"Mass cytometry could also identify a small number of proteins that can be used as specific 'biomarkers' that can predict a patient's response to therapy, and be used to match that patient with the most effective treatments. We've already started collaborations with our clinical colleagues to investigate this possibility further," Associate Professor Gray said.

The research was published in the journal Cell Death & Differentiation.

The research was supported by the Australian National Health and Medical Research Council, a Fulbright Australia-America Postdoctoral Fellowship, Royal Australasian College of Physicians, Leukaemia Foundation of Australia, Cancer Council Victoria, US Leukemia and Lymphoma Society, US National Institutes of Health and the Victorian Government.