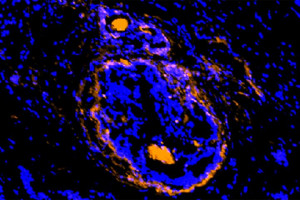 Scientists at Washington University School of Medicine in St. Louis have developed a new imaging agent that could let doctors identify not only multiple types of tumours but the surrounding normal cells that the cancer takes over and uses as a shield to protect itself from attempts to destroy it.

The study appears in the journal Nature Biomedical Engineering.

The imaging agent, referred to as LS301, has been approved for investigational use in small clinical trials at Siteman Cancer Center at Barnes-Jewish Hospital and Washington University School of Medicine.

The first trial will investigate its use in imaging breast cancer.

"This unique imaging agent identifies cancer cells as well as other compromised cells surrounding the tumour," said Samuel Achilefu, PhD, the Michel M. Ter-Pogossian Professor of Radiology. "Cancer transforms surrounding cells so that it can proliferate, spread to other parts of the body and escape treatment. This imaging compound can detect cancer cells and their supporting cast, the diseased cells that are otherwise invisible."

The compound binds to the activated form of a protein called annexin A2, which is present in many types of solid tumours but not healthy tissue.

The activated form of the protein promotes inflammation and invasiveness of these tumours, which allows the cancer to spread.

Solid tumours that contain activated annexin A2 are found in breast, colon, liver, pancreatic, head and neck, and brain cancers.

Since the activated form of the protein also is present in the cells that surround the tumour - and not normal, healthy cells - doctors potentially could use this imaging agent to identify cells the tumour has hijacked.

Despite their benign status, these hijacked cells protect the tumour from chemotherapy, radiation and other attempts to kill the cancer cells.

Such co-opted cells also conceal cancer stem cells, whose stealth presence can lead to a recurrence of the tumour.

"We are coming to the realisation that to eradicate cancer, we also need to focus on the microenvironment of the tumour," said Achilefu, who also directs the university's Optical Radiology Lab at the Mallinckrodt Institute of Radiology and is co-leader of the Oncologic Imaging Program at Siteman. "Most cancer drugs are designed to target cancer cells. But cancer cells create their own fiefdom, where they impose their own rules. If a normal cell nearby wants to continue living, it must follow the new rules. And slowly these cells come to identify with the tumour rather than their normal identity."

Achilefu expects that with a tumour and its surrounding fiefdom illuminated by the new imaging agent, doctors would have a better chance of removing the entire tumour as well as any areas that are likely to harbour microscopic cancer cells.

In past work, Achilefu's team has developed cancer goggles that allow surgeons to visualise cancer cells in real time during surgery to remove a tumour.

The new imaging agent can be used with these goggles, which are being evaluated in clinical trials.

The researchers also are working on a version of the compound that could be used in positron emission tomography (PET) scans, which many cancer patients undergo to assess whether cancer has spread.

As Achilefu and his colleagues saw that the compound lit up the hijacked cells on the periphery of the tumour, they were surprised to see the imaging agent light up parts of the central core of the tumour as well.

"We were amazed when we saw this because it's extremely difficult to access anything inside a tumour," Achilefu said. "There seems to be a type of immune cell that carries the imaging agent into the core of the tumour. So we now see the tumour margin and the core light up. This allows us to imagine a situation in which we could deliver a drug to the outside and the inside of the tumour at the same time. This dual targeting is not something we purposefully designed - it's not something we ever anticipated."

With this in mind, Achilefu's team conducted mouse studies to show that the researchers can attach a chemotherapy drug to the compound and use it to image the tumour and treat the disease simultaneously.

"Attaching a chemotherapy drug to this targeted imaging agent could reduce side effects as we are delivering the drug directly to the tumour," he said. "If the clinical trials are successful with the imaging, we will move into therapy."