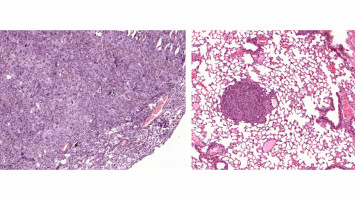 Squamous cell carcinoma is a very unusual type of cancer.

They occur in many tissues - for example in the lungs, oesophagus, pancreas, throat and pharynx, and on the skin.

Due to the many mutations in this type of cancer, treatment is a particularly challenging task for medicine.

However, all squamous cell carcinoma have a common Achilles' heel: They are dependent on the cancer protein ∆NP63.

This is a protein that only occurs in this type of tumour and regulates essential biological processes.

An international research team led by Julius-Maximilians-Universität (JMU) Würzburg in Bavaria, Germany, has now found a way to inactivate the cancer protein with the help of another protein and thus curb the growth of squamous cell carcinoma.

The study results are published open access in the journal EMBO Molecular Medicine.

The helpful protein is the deubiquitylase USP28, which is particularly common in squamous cell carcinoma. It controls the amount of the cancer protein ∆NP63.

"The deubiquitylase belongs to the so-called ubiquitin-proteasome system, which can be imagined as a towing company," explains Dr. Markus Diefenbacher, group leader at the JMU Chair of Biochemistry and Molecular Biology I. His research group was in charge of the study.

"In healthy cells, this towing company marks ,incorrectly parked' proteins with a kind of parking ticket, namely the protein ubiquitin. "It then towed the parkers away and disposed of them. But the protein can remove the parking ticket and thus prevent the towing. In tumour cells, there is often a loss of traffic wardens/controllers or an accumulation of USP28. Therefore, ∆NP63 in a tumour cell behaves in a similar way to an incorrectly parked car where the parking ticket is permanently removed," explains Diefenbacher.

The research team has now been able to prove the dependence of squamous cell carcinoma on the protein USP28: Using a preclinical inhibitor, it switched off ∆NP63's parking ticket remover in the tumour cells.

The tumours then stopped growing.

"Many cancer proteins are constructed in such a way that it is not possible to develop a direct active substance against them with the methods currently available," explains the Würzburg researcher.

Also, no direct therapeutic attack on the cancer protein ΔNP63 is possible.

However, by switching off USP28, the cancer protein could be rapidly degraded in human and animal tumor cells and the tumor could be fought. At the same time, there were no side effects in healthy cells. "We have thus discovered a good new way of attacking squamous cell carcinoma," said Diefenbacher.

The inhibitor used is not yet suitable for therapeutic use in humans. It still needs further research. This is done in collaboration with the research group of JMU professor Caroline Kisker at the Rudolf Virchow Centre for Experimental Biomedicine. Diefenbacher: "In cancer therapy, inhibitors are already being used that switch off the entire ubiquitin-proteasome system. Our work now shows a possibility of switching off only one component of this system and thus being able to combat the tumour cells even more specifically."

Next, Diefenbacher's team will look for further inhibitors that can also be used against USP28. "In addition, we will also look for other proteins in squamous cell carcinoma which these tumours depend on, and investigate whether the ubiquitin-proteasome system can be used to target these proteins for therapy," says the JMU researcher.