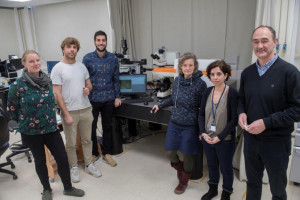 It is a project geared towards the study of cancer, melanoma and breast cancer, in particular, and seeks to better understand the growth and dynamics of tumours, which also avoids the need for animal experiments.

4DbioSERS is a five-year project funded by 2.4 million euros from the European Research Council (ERC) as part of the prestigious ERC Advanced Grants call awarded to high-risk and high-gain projects.

Liz-Marzán sums up the key aspects of the project thus: "We are working on the building of a kind of micrometric scaffolding using various methods (including 3D printing) and which has gold nanoparticles that will act as sensors built into it. A mixture of tumour cells, other types of cells and other components are cultured inside the scaffolding to reproduce a real tumour as faithfully as possible so that the aforementioned nanosensors will allow us to detect biomarkers relating to the evolution of the tumour in a range of conditions, which include changing the temperature or pH, adding drugs or creating other conditions that could affect it and which will help to design more effective treatments afterwards."

They are also considering "marking some of the cells to see how they are displaced inside the tumour, or to see whether certain types of cells are segregated in a specific place so that the heterogeneity of the tumour can be studied", he added.

The research is published in the journal Advanced Functional Materials.

The tool used to detect the biomarkers and monitor the displacement of the cells is SERS (surface-enhanced Raman spectroscopy), which is capable of analysing a broad variety of substances using very low spatial resolution, even at extremely low concentrations.

SERS uses the gold nanoparticles as sensors and also as labels, as well as a laser that enables the molecules close to these nanoparticles to be seen.

In just over one year "we have achieved results that tell us we are heading in the right direction", confirmed the Ikerbasque professor.

Firstly, they have shown that by using nanoparticles encoded for SERS "we can produce a three-dimensional reconstruction of systems formed by different types of cells organised into multilayers with a resolution that allows us to differentiate between each layer of cells over relatively long periods of time".

The advantage of the encoded particles used in this system is that they do not degrade over time, unlike fluorescent molecules routinely used for detections of this type.

The research group has managed to produce "a kind of three-dimensional map of the positioning of the cells inside these complex systems; in other words, they have succeeded in controlling the fabricated cell system to be able to demonstrate the three-dimensional detection of each cell that carries a code provided by the said encoded particles. This is a first step with a view to studying the dynamic evolution of these systems, in other words, to producing a 4D-study (in three dimensions plus time)", he explained.

They have also demonstrated that it is possible to culture tumour cells and measure the evolution of different biomarkers in real time: cancer metabolites or substances that are generated as a result of the presence of cancer cells.

"By using specially designed substrates, we have sufficient capacity to detect concentrations that are small enough to be significant in these tumour cultures. That way, we can see how the tumour cells that are developing in the system itself evolve over time and distinguish their behaviour under various conditions," explained Liz-Marzán.

Specifically, they have managed to observe the evolution of two metabolites simultaneously; "we have seen that one increases its concentration while the other declines, which confirms that we are seeing in real time the metabolic process caused by enzymes that are expressed in these tumour cells," he added.

Likewise, the detection of a certain molecule indicates that "there are cells of a particular type that are dying in the system under those conditions".

Liz-Marzán stresses the importance of this evidence because "it enables us to avail ourselves of practically remote detection, owing to the fact that our detector is not in direct contact with the cells, but simply studies the medium surrounding them. This is a significant step forward with respect to the ultimate objective".

Liz-Marzán revealed finally that they are working on the building of scaffolding for cell cultures using a 3D printer, which also allows detections to be made, but he concluded by saying that "there is still a long way to go".