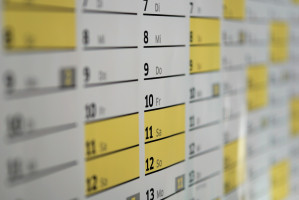 Early signs of cancer can appear years before diagnosis and developing tests for these genetic signs could provide new ways to spot cancer early, according to new research led by the Crick and EMBL-EBI, and supported by an international cancer genomics consortium, the Pan-Cancer Analysis of Whole Genomes Project.

The study, published in Nature, looked at 47 million genetic changes in more than 2,500 human tumours, across 38 cancer types.

By looking at how many times a single change had been replicated and copied across chromosomes, the researchers were able to determine the order in which they happened and the relative timing between them.

Using this method, they found that just over 20% of mutations can be considered early events in a tumour's development, with some of these changes taking place years, even decades, before the cancer is found.

Of these early mutations, half fall within the same nine genes, meaning there is a small number of genes that are common drivers of early cancer development.

"We've developed the first timelines of genetic mutations across the spectrum of cancer types. For more than 30 cancers, we now know what specific genetic changes are likely to happen, and when these are likely to take place. Unlocking these patterns means it should now be possible to develop new diagnostic tests, that pick up signs of cancer much earlier," says Peter Van Loo, co-lead author and group leader in the Cancer Genomics Laboratory at the Crick.

As cells in the body grow and divide, errors can be introduced in their DNA.

While most of these changes do not significantly alter our cells, some are harmful and are associated with the formation and growth of tumours.

These DNA errors continue to accumulate in cancerous cells, so a tumour can ultimately be made up of cells with many different genetic mutations.

"We have learned that cancer is the endpoint of a lifelong evolutionary process that drives our cells. This process is fuelled by mutations in the cells' genomes," says Moritz Gerstung, co-lead author and Group Leader at EMBL's European Bioinformatics Institute (EMBL-EBI). "These mutations occur as we age. Usually, there are no consequences to these mutations, but sometimes, the consequences can be dramatic. This process usually culminates within the decades prior to cancer diagnosis, but in some cases, we have been able to identify alterations as old as the patient."

The research identified cancer types in which mutations tend to happen particularly early, for example, ovarian cancer and two types of brain tumours, glioblastoma and medulloblastoma.

It also revealed the specific changes that are likely to happen early in each of the more than 30 cancer types.

One of the most common early changes in many cancers, including ovarian cancer, affects a gene called TP53.

In glioblastoma, an extra copy of chromosome 7 is very frequently gained early, while for pancreatic neuroendocrine cancer a number of chromosomes are lost in the initial stages of tumour development.

"What's extraordinary is how some of the genetic changes appear to have occurred many years before diagnosis, long before any other signs that a cancer may develop, and perhaps even in apparently normal tissue," says Clemency Jolly, co-lead author and PhD student in the Cancer Genomics Laboratory at the Crick.

In a separate paper from the international consortium, also published in Nature, Crick researchers identified the cancers that are likely to have many different mutations enter their DNA at the same time, as well as the timing of these events and the genes likely to be affected.

For example, 22% of the 2,500 tumours studied were found to have experienced an event called chromothripsis, where a DNA strand breaks in many places at once and the pieces are rearranged incorrectly.

This process was found to be an important and critically early event in the evolution of most cancers, particularly in melanomas.