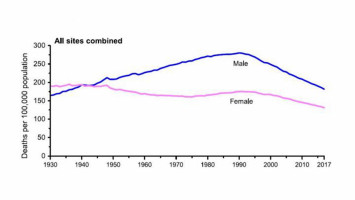 The news comes from Cancer Statistics, 2020, the latest edition of the American Cancer Society's annual report on cancer rates and trends.

The steady 26-year decline in overall cancer mortality is driven by long-term drops in death rates for the four major cancers - lung, colorectal, breast, and prostate, although recent trends are mixed.

The pace of mortality reductions for lung cancer - the leading cause of cancer death - accelerated in recent years (from 2% per year to 4% overall) spurring the record one-year drop in overall cancer mortality.

In contrast, progress slowed for colorectal, breast, and prostate cancers.

The article appears early online in CA: A Cancer Journal for Clinicians, and is accompanied by a consumer version, Cancer Facts & Figures 2020.

Overall cancer death rates dropped by an average of 1.5% per year during the most recent decade of data (2008-2017), continuing a trend that began in the early 1990s and resulting in the 29% drop in cancer mortality in that time.

The drop translates to approximately 2.9 million fewer cancer deaths than would have occurred had mortality rates remained at their peak.

Continuing declines in cancer mortality contrast with a stable trend for all other causes of death combined, reflecting a slowing decline for heart disease, stabilising rates for cerebrovascular disease, and an increasing trend for accidents and Alzheimer disease.

However, lung cancer still accounts for almost one-quarter of all cancer deaths, more than breast, prostate, and colorectal cancers combined.

The most rapid declines in mortality occurred for melanoma of the skin, on the heels of breakthrough treatments approved in 2011 that pushed one-year survival for patients diagnosed with metastatic disease from 42% during 2008-2010 to 55% during 2013-2015.

Even more striking are the mortality declines of 5% to 6% in individuals 65 and older, among whom rates were previously increasing.

"The news this year is mixed," said Rebecca Siegel, MPH, lead author of the report. "The exciting gains in reducing mortality for melanoma and lung cancer are tempered by slowing progress for colorectal, breast, and prostate cancers, which are amenable to early detection. It's a reminder that increasing our investment in the equitable application of existing cancer control interventions, as well as basic and clinical research to further advance treatment, would undoubtedly accelerate progress against cancer."

Highlights from the report:

"The accelerated drops in lung cancer mortality as well as in melanoma that we're seeing are likely due at least in part to advances in cancer treatment over the past decade, such as immunotherapy," said William G. Cance, M.D., chief medical and scientific officer for the American Cancer Society. "They are a profound reminder of how rapidly this area of research is expanding, and now leading to real hope for cancer patients."