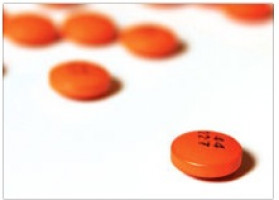 It is generally administered intravenously. In this trial, researchers evaluated an oral form of the drug, given in combination with encequidar, a p-glycoprotein pump inhibitor that allows the oral paclitaxel to be absorbed into the bloodstream.

The patients were randomly assigned in a 2:1 ratio to receive either 205mg/m²of oral paclitaxel plus encequidar (Pac E) for three days a week, or 175mg/m² paclitaxel intravenously (IV Pac) every three weeks.

Their tumours were evaluated for response and confirmed at two consecutive evaluations by a blinded, independent radiology company.

Results showed that 35.8 percent of the Pac E group had a confirmed tumour response, compared with 23.4 percent in the IV Pac group.

In evaluating the pre-specified modified intention to treat population, which excludes patients who did not have target tumours that could be evaluated by the central radiologist per RECIST or who did not receive sufficient treatments, the response rate was 40.4 percent for the Pac E group and 25.6 percent for the IV Pac group.

Furthermore, a higher percentage of Pac E patients are continuing to receive treatment.

They reported lower incidence and severity of neuropathy —17 percent, compared with 57 percent in the IV Pac group.

Grade 3 neuropathic symptoms were experienced by 1 percent of the patients in the Pac E group, versus 8 percent in the IV Pac group.

Updated figures may be provided at SABCS.

“This oral form of paclitaxel provides a new therapeutic option for patients, in particular, for those who cannot easily travel,” Umanzor said.

“While blood counts still need to be monitored, oral administration allows patients to remain home during therapy, and avoid spending significant time in the chemotherapy unit. We were pleasantly surprised that responses were durable, conferring an early survival advantage with minimal neuropathy,” he continued.

Umanzor said the next step will be testing the tolerability of oral paclitaxel in patients at high risk of developing peripheral neuropathy.

The oral formulation may also be studied in other cancers, either as a monotherapy or in combination with other agents.

Umanzor pointed out that while the study’s primary endpoint of confirmed tumour response was evaluated blindly, the study could not be blinded at the clinical site.

This may have created bias in the reporting of adverse events, he explained.

Also, the study was statistically powered only for confirmed response rate and not for the secondary endpoints.