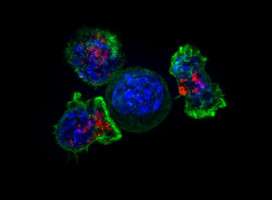 Promising pre-clinical results using a bispecific T-cell engager (BiTE), an experimental immunotherapy agent to attack myeloma cells in the laboratory and in mice implanted with human myeloma cells, have been presented at the 61st American Society of Hematology (ASH) Annual Meeting.

First author of the study is Shih-Feng Cho, MD, PhD, and senior author is Yu-Tzu Tai, PhD - scientists in the Jerome Lipper Multiple Myeloma Center and the LeBow Institute for Myeloma Therapeutics at Dana-Farber.

This activates the T cell to attack the cancer cell.

BiTEs are somewhat similar to CAR T cells, another form of immunotherapy, but unlike CAR T cells, which are modified in the laboratory from each patient’s immune T cells – requiring a long delay before treatment begins – BiTEs are an “off-the-shelf” product.

One limitation of previous BiTEs is their short half-life in the body, meaning they need to be infused frequently or for a long period of time. AMG 701 has an extended half-life, “making it more convenient to administer,” said Nikhil Munshi, MD, Director of Basic and Correlative Science at the Jerome Lipper Multiple Myeloma Center and an author of the study.

To increase the potency of AMG 701, the researchers administered it along with an immunomodulatory drug – lenalidomide or pomalidomide, drugs commonly used in treating myeloma.

In one experiment, mice that had received implanted myeloma tumour cells along with immune T cells were injected with AMG 701.

In another test, mice with myeloma tumours received AMG 701 or lenalidomide, or a both together, beginning 15 days after the tumour implant until the end of the study. While the tumours in the mice receiving only one of the agents eventually progressed, “the combination of AMG 701 with lenalidomide continuously suppressed tumour growth,” resulting in enhanced tumour regression and prevention of disease relapse.

“These results strongly support AMG 701-based clinical studies, both as monotherapy and in combination with immunomodulatory agents to enhance elimination of residual diseases and prolong long-term durable responses in multiple myeloma,” the scientists said.