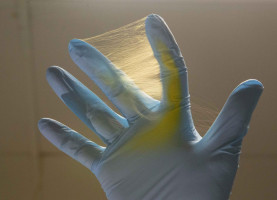 A novel engineering process can deliver a safe and effective dose of medicine for brain tumours without exposing patients to toxic side effects from traditional chemotherapy.

The treatment is implanted directly into the part of the brain where the tumour is surgically removed.

The study was published in Nature Scientific Reports.

"Chemotherapy essentially is whole-body treatment. The treatment has to get through the blood-brain barrier, which means the whole-body dose you get must be much higher," Steckl said. "This can be dangerous and have toxic side-effects."

Steckl is an Ohio Eminent Scholar and professor of electrical engineering in UC's College of Engineering and Applied Science.

Coaxial electrospinning combines two or more materials into a fine fibre composed of a core of one material surrounded by a sheath of another.

This fabrication process allows researchers to take advantage of the unique properties of each material to deliver a potent dose of medicine immediately or over time.

"By selecting the base materials of the fibre and the thickness of the sheath, we can control the rate at which these drugs are released," Steckl said.

The electrospun fibres can rapidly release one drug for short-term treatment such as pain relief or antibiotics while an additional drug or drugs such as chemotherapy is released over a longer period, he said.

"We can produce a very sophisticated drug-release profile," Steckl said.

The breakthrough is a continuation of work conducted by research partners and co-authors Dr. Henry Brem and Betty Tyler at Johns Hopkins University, who in 2003 developed a locally administered wafer treatment for brain tumours.

"For the current treatment, most drugs release within a week, but our discs presented the release for up to 150 days," he said.

Glioblastoma multiforme is a common and extremely aggressive brain cancer and is responsible for more than half of all primary brain tumours, according to the American Cancer Society.

Each year more than 240,000 people around the world die from brain cancer.

The electrospun fibre created for the study provided a tablet-like disk that increased the amount of medicine that could be applied, lowered the initial burst release and enhanced the sustainability of the drug release over time, the study found.

"This represents a promising evolution for the current treatment of GBM," the study concluded.

While this study used a single drug, researchers noted that one advantage of electrospinning is the ability to dispense multiple drugs sequentially over a long-term release.

The latest cancer treatments rely on a multiple-drug approach to prevent drug resistance and improve efficacy.

Steckl said the study holds promise for treatments of other types of cancer.

"Looking ahead, we are planning to investigate 'cocktail' therapy where multiple drugs for the combined treatment of difficult cancers are incorporated and released either simultaneously or sequentially from our fibre membranes," Steckl said.