New advances in the treatment of advanced lung cancer 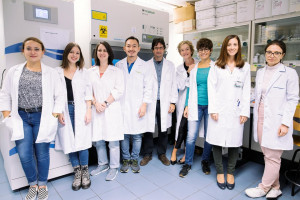 The University of Barcelona (UB) and Hospital Clínic de Barcelona collaborate with Boehringer Ingelheim Inc. to improve the efficiency of nintedanib, an antiangiogenic and antifibrotic drug, for the treatment of lung cancer.

This public-private collaboration enabled researchers identify molecular mechanisms underlying the lack of efficiency of this drug in squamous cell carcinoma, a sub-type of non-small cell lung cancer, and the important role of smoking in this lack of effectivity.

These results, published in the journal Cancer Research, could have implications in the design of new therapeutic strategies to expand the clinical benefits of the drug to a larger spectra of patients with lung cancer, the main cause of cancer-related death regarding cancer worldwide.

The 17th of November was the international day for this pathology.

The study is led by Jordi Alcaraz, tenure track-2 lecturer from the Department of Biomedicine of the Faculty of Medicine and Health Sciences of the University of Barcelona,with the collaboration of the team of Noemí Reguart, head of the Unit of Thoracic Tumours of Hospital Clínic de Barcelona and researcher at the August Pi i Sunyer Biomedical Research Institute (IDIBAPS).

The Bosch i Gimpera Foundation as Research Results Transfer Office (OTRI) of the University of Barcelona has been in charge of the contract management.

The project has been made possible thanks to the generous funding provided by Cellex Foundation, the Spanish Ministry of Science, Innovation and Universities (with co-funding from the EU FEDER funds), and the Spanish Association against Cancer (AECC).

Nintedanib is a drug developed by Boehringer Ingelheim which showed therapeutic benefits in patients with advanced lung adenocarcinoma.

Its action mechanism is based on the inhibition of receptors involved in the formation of new vessels (angiogenesis) and fibrosis, which drive tumour progression.

Previous studies within this collaboration reported that this drug is efficient to treat advanced lung adenocarcinoma but not squamous cell carcinoma.

To identify the causes of the differences between the two main sub-types of non-small cell lung cancer, the new study analysed tumour fibrosis (chronic tissue scarring) and the response to the antifibrotic treatment with nintedanib, in cells and tissue samples from lung cancer patients, provided by Hospital Clinic, the Respiratory Diseases Networking Biomedical Research Centre (CIBERES) and the Spanish Society of Pneumology and Thoracic Surgery (SEPAR).

The study used pre-clinical cell culture models that are unique in Spain, which allow the interaction between the two most abundant cell within a tumour: cancer cells and fibroblasts, a type of non-malignant cells that surround them and are key drivers of tumour progression.

"The results describe for the first time that tumour fibrosis is higher in adecarcinoma than in squamous cell carcinoma, which causes patients with adenocarcinoma to respond better to treatment with nintedanib.

Furthermore, we identify the underlying mechanism: the pro-fibrotic transcription factor SMAD3 in fibroblasts- the main cells that drive fibrosis- is more epigenetically repressed in squamous cell carcinoma than in adenocarcinoma, and this makes patients with squamous cell carcinoma to have less fibrosis and to be resistant to nintedanib", says Jordi Alcaraz, researcher at CIBERES.

The study also identified the key role of smoking in the lack of efficiency of the drug against squamous cell carcinoma. "This is the first time that a study describes how cigarette smoke particles modify epigenetically the SMAD3 gene to ultimately reduce its activity and increase the resistance to the drug", says the researcher says.

The results of the study could also have further implications in the design of therapeutical strategies to treat adenocarcinoma with different drug combinations of drugs.

"Since fibrosis is a common adverse effect induced by radiotherapy toxicity, our results suggest patients with adenocarcinoma (especially non-smokers) who receive radiotherapy could benefit from antifibrotic drugs such as nintedanib combined with radiotherapy. Likewise -continues Jordi Alcaraz-, since fibrosis is associated with immunosuppression and tumour growth, our results support that patients with adenocarcinoma could benefit from the combination of antifibrotic drugs like nintedanib with immunotherapy".

This public-private agreement results from the commitment of all the involved institutions working on quality research in a special health topic such as lung cancer, and in particular, squamous cell carcinoma, which affects about 30% of patients with this type of cancer.

"This is a good example of the important advances that can be obtained through collaborations between the university, the hospital and pharmaceutical companies", stresses Jordi Alcaraz.

Commercialized as Vargatef, nintedanib combined with docetaxel was the first treatment aimed at advanced lung adenocarcinoma to show a higher average survival per year (12.6 months) after the failure of the initial chemotherapy.

It is aimed for the treatment, combined with docetaxel, on patients with locally, recurrent or metastasic advanced non-small cell lung cancer with adenocarcinoma histology, after first-line chemotherapy.

Its clinical efficiency is proved by the results of the LUME-Lung 1 study, carried out in 27 countries with more than 1,300 included patients.

This study proved a significant improvement in the survival with the combined treatment of nintedanib with docetaxel.

Source and image: University of Barcelona