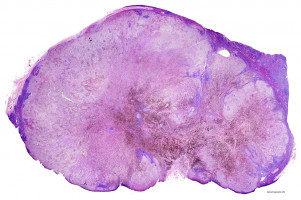 The effectiveness of current treatments for melanoma, the deadliest form of skin cancer, could be improved by using approaches that wipe out the 'survival system' of cancer cells according to a study published in Nature Communications.

Researchers from the Babraham Institute, AstraZeneca and the Cancer Research UK Cambridge Centre have demonstrated an approach, used in parallel with existing treatments, which knocks out one of melanoma cells' survival pathways and is effective at triggering tumour cell death and delaying treatment resistance.

The researchers suggest this approach may also help to tackle late stage cancers even after they have become resistant to existing treatments.

There are around 16,000 new melanoma skin cancer cases in the UK every year.

Although survival has doubled in the UK in the past 40 years, late-stage melanoma is aggressive and difficult to treat.

Around 55% of people with latest stage melanoma survive their disease for 1 year or more compared to nearly 100% of those diagnosed at the earliest stage.

Cancer cells can rely on various 'survival proteins' to stay alive despite the effect of treatment.

But so far, researchers have been unable to pinpoint which of these survival proteins are used by melanoma cells.

Researchers from the Babraham Institute and Cancer Research UK Cambridge Centre have now discovered that melanoma cells rely on a protein called MCL1, which is critical for the cells to survive when they are exposed to standard MEK and BRAF inhibitor drugs, such as trametinib or vemurafenib.

The researchers then studied an investigational compound from AstraZeneca, an MCL1 antagonist called AZD5991, and used it in the lab against models of melanoma.

They showed that by blocking MCL1, AZD5991 inactivated the backup survival system within melanoma cells.

Combining AZD5991 with a treatment like vemurafenib had a 'double whammy' effect against cancer cells, eliminating them more effectively.

This drug combination also worked in late-stage melanoma tumours, derived from patients and grown in mice.

In these mice, combinations of vemurafenib and AZD5991 reduced the size of tumours, sometimes almost completely, and slowed their growth compared to standard treatment alone.

However, used alone, AZD5991 had no effect in these models.

Patients with these aggressive tumours may be given a different type of drug called an ERK inhibitor; although these drugs are still undergoing clinical trials and not widely available yet, it already seems that melanoma could evolve rapidly to resist them.

Future clinical trials could look at whether blocking MCL1 at the same time as giving an ERK inhibitor, could halt the evolution of these late-stage tumours from becoming resistant.

Lead researcher Dr Mathew Sale, from the Babraham Institute, said: "This study has demonstrated that melanoma cells are addicted to the MCL1 protein for survival, but only when they are treated with the existing melanoma drugs.

"By targeting both vulnerabilities at the same time we can kill melanoma cells, causing greater inhibition of tumour growth over a longer time period."

Dr Simon Cook, group leader at the Babraham Institute, said: "This study stems from 15 years of basic research in which we have sought to understand the normal signals that control whether a cell lives or dies.

"However, we became increasingly aware that these same pathways were not functioning correctly in cancer. Thanks to a long-standing partnership with AstraZeneca and the Cancer Research UK Cambridge Centre we were able to translate this basic research to understand and potentially better treat melanoma."

Professor Duncan Jodrell from the Cancer Research UK Cambridge Centre, who contributed to the research, said: "This work highlights the importance of performing collaborative research like this, as it could lead to new ways to tackle cancers, particularly those that are hard to treat. Our work also shows the value of scientists in basic science labs working closely with drug development specialists and industry scientists, which is fundamental if we want to find better treatments for people affected by cancer."