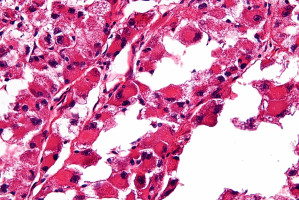 Sarcomas - cancers that arise from transformed mesenchymal cells (a type of connective tissue) - are quite deadly.

Gastrointestinal stromal tumours (GISTs) are the most common human sarcoma and are initiated by activating mutations in the KIT receptor tyrosine kinase.

Micro-GISTs are a smaller variation of clinical GISTs and are found in one-third of the general population without clinical symptoms.

Although the micro-GISTs and clinical GISTs share the same KIT mutations, micro-GISTs have limited growth potential and do not exceed a centimetre.

This size limitation suggests that additional genetic alterations contribute to the progression of clinical GISTs.

Chromosome 22q deletions are frequent chromosomal abnormalities in human GISTs, occurring in ~50% of GISTs, and are thought to contribute to the pathogenesis of this disease.

However, the crucial gene in 22q was unknown for decades.

In a study published online in PNAS, a team led by Prof. WANG Yuexiang of the Shanghai Institute of Nutrition and Health (SINH) of the Chinese Academy of Sciences, together with Prof. Jonathan Fletcher from Brigham and Women's Hospital and Harvard Medical School, described a novel druggable driver gene in GISTs.

DEPDC5 was shown to be a chromosome 22q-targeting tumour suppressor, silenced by mutations in GIST specifically.

They demonstrated that DEPDC5 modulates the sensitivity of GIST to KIT inhibitors, and combination therapy using the mTOR inhibitor and KIT inhibitor may work better in GIST patients with DEPDC5 inactivation.

These findings of recurrent genomic alterations, together with functional data, validate the DEPDC5 as a bona fide tumour suppressor contributing to GIST progression and a biologically relevant target of frequent chromosome 22q deletions.

The DEPDC5-inactivated mutations are prognostic in that they are associated with aggressive GISTs, where they promote GIST progression and reduce sensitivity to KIT inhibitors.

The intriguing discovery of DEPDC5 also shows that biologic mechanisms of focal epilepsy (note that genetic DEPDC5 inactivation is responsible for focal epilepsy) are relevant in tumourigenesis, and thereby highlight that recent therapeutic developments for focal epilepsy (e.g., DEPDC5 agonists) could also serve as anti-cancer drugs.