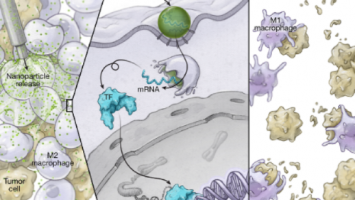 Our immune cells usually do a great job of keeping us healthy, staving off infection and killing tumour cells.

But sometimes, they betray us and join the enemy: cancer. tumours often release factors that convince immune cells to help tumours instead of hurting them.

But what if these double agent immune cells could be convinced to switch allegiance yet again?

Nanotechnology could be the key to redirecting specialised immune cells to attack and shrink tumours.

The researchers demonstrated that once reprogrammed, these cells, called macrophages, help orchestrate an anti-cancer immune response that can shrink, and even clear, tumours in mice with ovarian, brain and skin cancers.

“Unlike other drugs that may suppress macrophage function, our nanomedicine reprograms inhibitory macrophages into anti-tumour effector cells that also act on other immune cells with anti-tumour function,” said Dr. Matthias Stephan, the Fred Hutch immunobioengineer who led the study.

“We show that we can affect a lot of different immune cells, and we haven’t seen any of the toxicities that could be associated with treatments that modulate the immune system throughout the body, such as checkpoint inhibitors,” he said.

And unlike other cell-programming approaches, these nanoparticles are designed so that they don’t alter cells’ DNA, sidestepping concerns about permanently modifying our genetic code.

The work was funded by the FHCRC Immunotherapy Initiative, the Fred Hutch/University of Washington Cancer Consortium, the National Science Foundation, the American Cancer Society and the American Brain tumour Association.

In a step that will help accelerate the technology’s journey to patients, the National Cancer Institute’s Nanotechnology Characterization Laboratory has chosen Stephan’s nanoparticles as one of three promising nanotechnologies for which it will conduct the independent characterisations needed to bring it to the clinic.

The technology will be exclusively licensed to Tidal Therapeutics, a Fred Hutch spinoff company.

Stephan is a scientific founder of Tidal and holds stocks in the company.

Based on these results, Stephan, with Tidal, is planning a Phase 1 clinical trial of the nanoparticles in women with ovarian cancer. He hopes that his strategy will someday extend survival for patients with no other treatment options.

Macrophages, best known for gobbling up bacteria and infected cells, are one type of immune cell that tumours can turn into pro-cancer collaborators. Inflammatory macrophages can also help alert other immune cells, such as killer T cells, to the presence of infected or diseased cells.

But macrophages can also help tamp down inflammation and stimulate wound healing.

The cancer is “trying to fool the immune system into thinking it’s a wound that never heals,” Stephan said. When immature macrophages enter the tumour, “the tumour then secretes suppressive factors that reprogram these helpful immune cells into suppressor cells. And now instead of helping eradicate the tumour these immune cells help maintain the tumour,” he said.

What to do about suppressive macrophages?

Strategies that act to remove suppressive cells have so far had little success in humans, Stephan said. And previous macrophage-stimulating strategies relied on high doses of drugs that amped up macrophages throughout the body, causing toxic effects in the process.

Stephan wanted to develop a strategy that could target macrophages without causing bodywide inflammation and damage.

Nanoparticles, which could carry stimulating instructions straight to macrophages, could be the key.

Stephan began his career fascinated by the potential power of using the immune system against cancer.

He turned to nanobiology to make immunotherapy quick, cheap and accessible to as many patients as possible.

To that end, he has developed dissolving nanoparticles that can package genetic instructions to influence the function of cells still inside the body.

Though so far only tested in animal models, he envisions using them to turn patients into their own immune cell-engineering laboratories.

Stephan has used the nanoparticles to tweak the DNA of T cells, a different type of immune cell, inside mice.

This time, he and Dr. Fan Zhang, a postdoctoral fellow on his team who spearheaded the work, used molecules of synthetic messenger RNA, or mRNA.

Our cells use mRNA as an instruction manual for building proteins.

The mRNA in Stephan and Zhang’s nanoparticles carries instructions for building two macrophage-stimulating proteins, which allows them to reprogram macrophages without touching their DNA.

Zhang, Stephan and the team tested the strategy in mice with ovarian cancer, skin cancer and brain cancer.

In the mice with ovarian cancer, they delivered the nanoparticles once a week for nine weeks via a catheter into the area that surrounds the abdominal organs.

This is the same way that chemotherapy is delivered to human ovarian cancer patients.

The scientists saw that tumours cleared completely in 40% of mice that received macrophage-targeting nanoparticles.

In addition, more T cells, which can also kill off cancer cells, entered their tumours.

Stephan and Zhang repeated the approach in mice with glioblastoma, a type of brain cancer, and metastatic melanoma, a type of skin cancer that has spread through the body.

By infusing the nanoparticles intravenously three times a week for three weeks, they were able to similarly extend survival for mice with these types of cancer.

The findings show that the nanoparticles are heading off immature macrophages before they reach the tumour, Stephan said: “We are targeting these cells that the tumour wants to recruit and we make sure that they don't turn into suppressor cells, but they turn into the exact opposite.”

His team was able to show that nanoparticles carrying mRNA encoding human proteins could also reprogram macrophages, a first step toward an in-human trial of the approach. Nanoparticle infusion also appeared to cause little or no widespread toxicities in the treated mice.

Tidal Therapeutics is taking on the challenge of producing the nanoparticles in large amounts and as a shelf-stable product.

The next step, Stephan hopes, is the initial ovarian cancer trial, which would enrol patients whose cancers have resisted other forms of treatment.

“It's not a therapy that is supposed to be given for the rest of the patient's life,” he explained.

The nanoparticles are also not designed to compete with chemotherapy, which is an effective first step for many patients.

Relapse rates vary depending on cancer stage at diagnosis, but in about 70% of patients, tumours recur.

Stephan hopes that his nanoparticles can help address these patients’ need for more therapies. And though the macrophage-programming nanoparticles will initially be tested alone, he envisions them working in concert with standard cancer immunotherapies.

“My expectation is that we can prolong the survival of these patients [with ovarian cancer] without any additional side effects,” Stephan said. “It’s a therapy that is designed to be selective and not destructive.”