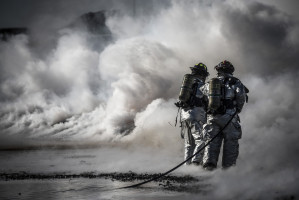 The presence of chemicals made as the body breaks down fats, proteins, and carbohydrates can predict whether Sept. 11, 2001 first responders exposed to toxic dust at the World Trade Center site subsequently develop lung disease, a new study finds.

The researchers from NYU School of Medicine say their experiments are the first to suggest which compounds may have prevented disease in firefighters and emergency workers at the disaster site.

Specifically, their study linked 30 such chemicals - called metabolites - to increased protection against obstructive airway disease (OAD), which blocks air from flowing out of the lungs.

While those protected had low levels of the metabolites, they had greater amounts than first responders who developed OAD since 9/11.

Based on these metabolic predictors, researchers are hopeful that drugs, dietary changes, and regular exercise can protect other people exposed to toxic particles created by fire and smoke.

The protective chemicals in the current study include protein-building amino acids and omega-3 fatty acids, which are readily obtainable, say the study authors, from diets rich in fish and olive oil (e.g., Mediterranean diet).

The latest results follow previous work, published last year by the same team, which identified more than two dozen other metabolites that occurred at lower levels in firefighters who did not develop lung disease (and are not protective).

"Our new work shows that some metabolites may actually protect first responders from losing their lung function," says study senior investigator Anna Nolan, MD, an associate professor in the Department of Medicine at NYU Langone Health. "By combining the results of our studies to date, we are closer to predicting who gets lung damage. This, in turn, offers unique opportunities for better diagnosis and prevention of obstructive airway disease moving forward," adds Nolan.

For the new study, publishing online in the journal Scientific Reports, researchers analysed blood samples from 14,000 9/11 first responders (firefighters and EMS workers) who due to health regulations had their lung function tested before the disaster, after, and every year since.

From among 594 common metabolites found in the human body, researchers then identified those most closely tied to first responders who showed no signs of OAD.

Among the study's key findings, researchers found that the presence of specific metabolites was predictive of disease with 93.3 percent accuracy.

Nolan says she hopes to develop a blood test that can be used to screen disaster victims and first responders after toxic exposure, identifying people at least and at greatest risk of developing lung disease.

Test populations could include those living in the vicinity of forest fires or chemical explosions.

Early identification of those at highest risk could lead to better treatments designed to reduce or minimise lung damage.

The latest findings also build on the team's other research, also publishing this month in the journal Chest, which shows that having a cluster of heart disease risk factors, known as metabolic syndrome, also predicts long-term development of lung dysfunction among 9/11 first responders.

Results showed that having three of the five factors of metabolic syndrome led to as much as a 56 percent increase in loss of lung function that prevents first responders from continuing to work.

"The livelihood of first responders is dependent on their health," says study lead investigator George Crowley. "It is incredibly important for physicians to analyse the presence or absence of certain metabolites in these patients' blood soon after a disaster and use the results to help treat them, keeping them fulfilled in their jobs and their lives," says Crowley.

Researchers next plan to look at vascular injury among the World Trade Center first responders to determine if it is an early sign of broader heart problems.