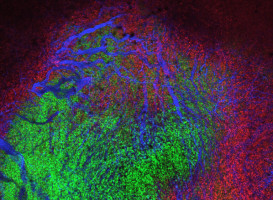 In recent years it has been increasingly appreciated that immune cells within the tumour microenvironment contribute to tumour progression and, importantly, to the tumour's response to therapy.

Focusing on two types of immune cells, neutrophils and macrophages, they found large diversity in the cells' frequency, including neutrophil-enriched and macrophage-enriched groups whose functionality suggested potential roles in immunotherapy.

The work highlights that heterogeneity of both tumour cells themselves and immune composition of the microenvironment are important considerations for therapy.

The report appears in the journal Nature Cell Biology.

"We know that breast cancer is very heterogeneous. For many years we have recognised different subtypes of breast cancer, for instance, oestrogen receptor positive (ER ), ER- and triple negative, and these categories can be further divided into subcategories. To that, we now have to add the diversity of the immune cell component in the tumour microenvironment," said corresponding author Dr. Xiang 'Shawn' Zhang, professor at the Lester and Sue Smith Breast Center and member of the Dan L Duncan Comprehensive Cancer Center at Baylor College of Medicine.

With the goal of better understanding the role immune cells within tumours play in tumour growth and in response to therapy, Zhang and his colleagues conducted a series of analyses to characterise the immune cell composition of tumour microenvironments in eight murine models and in clinical datasets of triple negative breast cancers.

"Focusing on neutrophils and macrophages, we investigated whether different tumours had the same immune cell composition and whether seemingly similar immune components played the same role in tumour growth. Importantly, we wanted to find out whether differences in immune cell composition contributed to the tumours' responses to immunotherapy," said Zhang, a McNair Scholar at Baylor.

The researchers found large diversity in the frequency of neutrophils and macrophages among the tumour samples, including some tumours that preferentially attracted macrophages, while others attracted more neutrophils.

The predominance of one cell type over the other can be explained in part by the type of molecules produced by the tumour.

As Zhang explained, some tumours secrete molecules that attract macrophages, while other tumours produce other molecules that lure neutrophils to the tumour site.

Interestingly, macrophages and neutrophils seem to work against each other.

Neutrophils, on the other hand, tended to promote tumour growth.

"These findings are just the beginning. They highlight the need to investigate these two cellular types deeper. Under the name 'macrophages' there are many different cellular subtypes and the same stands for neutrophils," Zhang said. "We need to identify at single cell level which subtypes favour and which ones disrupt tumour growth taking also into consideration tumour heterogeneity as both are relevant to therapy."