Identification of all types of germ cells tumours 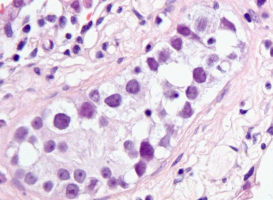 Germ cell tumours constitute a diverse group of rare tumours, which occur in the testes, ovaries and also in other places.

Some germ cell tumours exist prenatally, while others present during or after puberty.

The majority is benign.

Malignant germ cell tumour most frequently appear in the testicle of adolescent and young adult men.

Fortunately, these are treatable; even when metastasised, survival rates are over 80 per cent.

When an oocyte is fertilised, the development of an embryo is initiated.

The fertilised oocyte has the potential to become any other type of cell.

Early in development cells lose this ability, and the number of cell types they may become is restricted.

'However, in a new individual there need to be new germ cells that have the potential to become all cell types', explains prof. dr. Leendert Looijenga (Princess Máxima Center and Erasmuc MC). 'These cells carry the potential danger of become germ cell tumours by spontaneously starting embryonal development.'

Different molecular mechanisms need to prevent spontaneous embryonal development by germ cells, since these would result in tumours.

Sometimes things go awry in one of these protective mechanisms.

'Dependent on which mechanism is affected, we distinguished until recently five types of germ cell tumours', says Looijenga.

They described their finding in the scientific magazine Nature Reviews Cancer.

One of the newly described categories is type 0.

'This is in fact an underdeveloped Siamese twin', says Oosterhuis. 'At the points of attachment of the Siamese twins, a second embryo manifests as germ cell tumour. The baby is born with the tumour.'

Type 0 and the other five, earlier described types differ from other types of cancer in that they do not arise as a result of mutations in the DNA, but are caused instead by failure of the mechanism that should prevent spontaneous embryonal development.

Germ cell tumour type VI is the only type that is caused by mutations in the DNA.

Very seldom that occurs spontaneously in the body, but more often adult cells are genetically modified in the laboratory for therapeutic purposes, for instance regenerative medicines.

'These cell may only be safely used, when we can prevent the development of germ cell tumour type VI', states Looijenga.

The new insight into the development of germ cell tumours and the division based upon that constituted a solid ground for future epidemiologic, fundamental and clinical research.

Moreover, the division is highly valuable in direct patient care.

'Treatment sensitivity and also resistances can be mapped more reliably. This may contribute to improved treatments in the future,' says Looijenga.