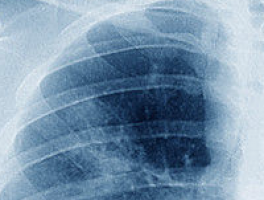 Lung cancer is the second most common cancer found in both men and women.

It is estimated there will be roughly 228,000 new lung cancer cases this year, and nearly 30% of those patients will have mutations in the KRAS pathway.

This type of mutation makes the cancer more aggressive and difficult to treat.

Researchers at Moffitt Cancer Center are hoping to change that.

In a new study published in Cancer Research, the team discovered a new treatment approach that may help this group of patients.

KRAS is a gene that regulates cell signalling in an "on" and "off" manner, leading to normal cell growth and division.

Mutations that occur in the KRAS gene cause the protein to ignore any "off" signals that it receives, which results in unchecked cell growth.

This is why researchers have been investigating areas in the KRAS pathway as possible therapeutic targets.

For example, in melanoma, therapies that target the BRAF mutation, a protein in the KRAS pathway, have led to a positive patient response.

Moffitt researchers believe the MEK kinase, also found in the KRAS pathway, can be a possible target for lung cancer treatment.

Through a series of drug screens, cell line and animal model experiments, they found that lung cancer cells treated with the MEK inhibitor trametinib in combination with the cytokines TNFα and IFNγ resulted in substantially more cell death than treating with a MEK inhibitor alone.

TNFα was identified in the 1970s as Tumor Necrosis Factor but initial enthusiasm for using it in cancer treatment was quickly dampened by inflammatory response induced following TNFα administration, and the fact that most tumour cells resist killing by TNFα.

In this study, the research team found that MEK inhibitors increase the number of receptors on the cell surface for TNFα to bind to, which leads to the delivery of a more potent and sustained cell death signal.

IFNγ, a cytokine known to be crucial for anti-tumour immunity, further enhances the anti-tumour activity of MEK inhibitors and TNFα.

"MEK inhibitors alone do not provide strong overall response for this group of patients," said Amer A. Beg, Ph.D., senior member of the Immunology Department and Lung Cancer Center of Excellence at Moffitt and lead author of this study.

Beg and his team took their research further by investigating whether MEK inhibitors in combination with therapies known to increase expression of TNFα and IFNγ would provide a better response.

They discovered that adding a PD-1 immune checkpoint inhibitor with MEK inhibitors resulted in the strongest tumour regression in mice.

The researchers are planning further studies to combine MEK inhibitors with other immune therapies that provide strong expression of these cytokines in the tumour microenvironment, such as CAR T and adoptive T cell therapy approaches.

"These studies will help determine if modulation of the immune microenvironment along with tumour signalling is a viable treatment strategy for lung cancer patients with KRAS mutations and potentially other mutations that rely on MEK signalling," said Mengyu Xie, a cancer biology graduate student studying at Moffitt and a first author of the study.

"Demonstrating that an anti-cancer agent can so effectively modulate the activity of a cytokine signalling pathway crucial for so many biological processes is conceptually novel and can lead to new understanding of oncogenic pathways and strategies for targeting them" said Beg.

We are an independent charity and are not backed by a large company or society. We raise every penny ourselves to raise the standards of cancer through education. You can help us continue our work to address inequalities in cancer care by making a donation.