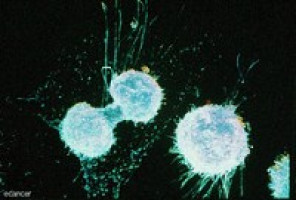 A crucial signalling pathway that can tell the immune system to fight off cancer can also be co-opted by cancer cells to put the brakes on the immune system, according to a new study published in the journal Cell.

Researchers say this increased understanding can serve as a biomarker that helps predict which patients are likely to respond to immunotherapies.

They also show how tipping the balance has potential implications for therapy itself, since blocking the signal in cancer cells helps the immune system fight off tumours in multiple pre-clinical cancer models.

The study focused on the interferon (IFN) signalling pathway.

Interferons normally help activate the immune system to protect cells from viruses and get their name because they literally interfere with a virus' ability to spread.

However, IFNs can also put the brakes on the immune system.

"This paradoxical effect has been seen in other diseases - such as chronic viral infections - but our study shows how cancer cells take advantage of the suppressive properties of IFNs to interfere with cancer immunotherapy," said the study's senior author Andy J. Minn, MD, PhD, an associate professor of Radiation Oncology and director of The Mark Foundation Center for Immunotherapy, Immune signalling, and Radiation at the University of Pennsylvania.

This study builds on previous research from Minn and his team, which initially identified IFNs as having a role in cancer immunotherapy resistance.

For the current study, researchers found when IFNs put a brake on the immune system, cancer cells intercept and manipulate that signal.

However, when IFNs are allowed to send signals to the immune system, immune cells are able to do their jobs and kill tumours.

Understanding this balance of how IFN signals are routed to immune versus cancer cells could provide a biomarker for whether immunotherapy can be effective.

"If we know the signalling is tilted toward immune cells or toward cancer, we may be able to better predict if a patient is likely to respond," Minn said.

For cases where IFNs signal is stronger in cancer cells, there could be a therapeutic answer.

Blocking the signal in tumours would only leave the "go" signal, freeing up the immune system to attack the cancer.

That's exactly what happened when researchers tested the theory in pre-clinical models of melanoma, breast, and colorectal cancer treated with immunotherapies like PD-1 inhibitors or CAR T cells.

"IFN signalling exists in the majority of human cancers, so this could end up applying more broadly," Minn said.

The next step is to figure out novel and safe ways to make IFNs' "go" signal stronger, or to block the "stop" signal.

A trial testing that second approach in lung cancer patients is already enrolling patients at the University of Pennsylvania.