Therapeutic strategies based on evolutionary principles may improve patient outcomes 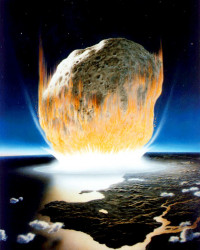 For over a century, cancer treatment research has primarily focused on developing new and better drugs.

The introduction of new drugs, particularly in the past 20 years, has significantly improved patient outcomes when the tumour is localised to one region of the body.

Unfortunately, many patients with wide-spread metastatic disease still succumb to their cancer.

The problem is not that the new drugs are ineffective.

In fact, the initial responses are often excellent, sometimes producing complete disappearance of the tumour.

But a small number of cells evolve resistance and eventually allow the tumour to return.

In a new article published by Cancer Research, Moffitt Cancer Center researchers propose the evolutionary dynamics of background extinctions suggest this focus on finding new and better drugs may have neglected opportunities to develop new and better treatment strategies to improve outcomes with currently available drugs.

Each drug or combination of drugs is typically administered according to a "standard of care" that teaches any treatment that reduces the tumour size should continue until the tumour recurs or progresses (i.e. significantly increases in size on imaging studies).

The Moffitt team proposes this strategy actually may be missing an opportunity to cure some metastatic cancers through evolution-based sequencing of currently available drugs.

According to Robert Gatenby, M.D., co-founder and director of Moffitt's Center of Excellence for Evolutionary Therapy, the optimal result of treatment for metastatic cancers, in evolutionary terms, is extinction of the cancer population.

At first glance, the current strategy that applies treatment at the maximum possible dose seems like it should be the best approach because of its similarity to the famous dinosaur extinction caused by a meteor impact.

"Although the goal of creating a mass extinction of cancer cells is intuitively appealing, the dinosaur analogy is actually a cautionary tale because the effects are so indiscriminate.

While the impact did eliminate the Dinosauria superorder, it also destroyed many non-dinosaur species.

The problem with MTD (Maximum Tolerated Dose) therapy is similar because it is always limited by the toxic effects on normal cells.

It is very difficult to kill all of the cancer cells with a single treatment without also killing the patient," explained Gatenby.

Rather than using the dynamics of mass extinctions, Moffitt researchers believe that a more effective approach can be found in the evolutionary dynamics of background extinctions.

The group, which includes two physicians and an evolutionary biologist, explained that most species are lost not from catastrophic single-hits but rather from multiple events that subtly reduce a population through several different steps.

Typically, a species begins to slide toward extinction when an initial force, such as changing climate or introduction of a predator, significantly reduces the overall population leaving behind survivors that are often clustered in small, isolated, groups that are much less genetically diverse.

The damaged surviving population is then vulnerable so that even small evolutionary or ecological changes can drive them to extinction.

Importantly, however, the initial changes that reduced the population (the "first strike") will not cause extinction because the remaining individuals are resistant.

So, a background extinction requires a new "second strike" that is different from the "first strike."

However, in most cases, the "second strike" does not need be as powerful because the remaining population is less diverse and often isolated into small clusters containing only a few individuals.

The research team proposes the dynamics of background extinctions suggest an alternative strategy for treatment of metastatic cancers.

Many currently available therapies can produce a complete remission, meaning no remaining tumour can be detected.

However, in most cases, similar to the "first strike," a small number of resistant cancer cells remain hidden and eventually lead to tumour recurrence.

The important lesson from background extinctions is that this remaining population is resistant to the "first strike" treatment; continuing the same therapy is unlikely to be successful.

The research team suggests extinction of even large metastatic cancers may be possible by administering a sequence of drugs that can collectively eliminate the entire cancer population even though none of them alone could have had this effect.

The initial treatment that reduces the cancer population but cannot entirely eliminate it is the "first strike."

Rather than continuing to use this treatment until the tumour recurs, the background extinction model suggests the "first strike" drug should be stopped once a remission is achieved and that different "second strike" drugs should be applied immediately because the cancer population is most vulnerable to extinction.

Waiting to change treatment until the tumour progresses is probably too late because a cancer population must contain several billion cells before it can be observed on CAT scans or MRI scans.

The group pointed out this multiple-stage treatment principle is very similar to the sequence of different treatments that, after decades of clinical trials, has been found to cure children with acute lymphocytic leukaemia (ALL).

When put into context of the background extinction model, the strategy of paediatric ALL treatment, "is to use the first strike to deliver substantial damage to the tumour population and then simply continue to 'kick them when they are down,'" said Joel Brown, Ph.D., evolutionary biologist and senior member of Moffitt's Integrated Mathematical Oncology Department.