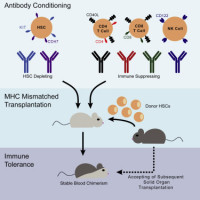 A combination of six antibodies can successfully prepare mice to accept blood and immune stem cells from an immunologically mismatched donor, according to a study by researchers at the Stanford University School of Medicine.

The recipient animals can then accept an organ or tissue transplant matching that of the donor stem cells without requiring ongoing immune suppression.

If the findings are replicated in humans, the work could transform the treatment of people with immune or blood disorders while also vastly increasing the pool of available organs for those who need transplants.

The technique is now primarily used to treat cancers of the blood and immune system.

"Radiation and chemotherapy are the current standard for preparing patients for a bone marrow transplant," said Irving Weissman, MD, professor of pathology and developmental biology at Stanford.

"For the past decade, we have been working to step-by-step replace these non-selective and dangerous treatments with targeted antibodies. This study is an important milestone that began with our isolation of purified blood stem cells 30 years ago," said Weissman.

Weissman, the director of Stanford's Institute for Stem Cell Biology and Regenerative Medicine and of the Ludwig Center for Cancer Stem Cell Research and Medicine at Stanford, is the senior author of the study, which will be published online June 13 in Cell Stem Cell.

"This study indicates that it's possible to perform these transplants in mice in a much gentler way without requiring a complete match between the donor and the recipient stem cells," George said. "It also opens the door to increasing the availability of solid organs for transplant."

Haematopoietic stem cells are a rare type of stem cell in the bone marrow that give rise to the progenitors of all blood and immune cells throughout our lives.

It's been known for some time that people with genetic blood disorders such as sickle cell anaemia or thalassemia, or those with autoimmune diseases or immune deficiencies, can be cured by a transplant of healthy haematopoietic stem cells.

But in order for the transplanted cells to settle in to the recipient's bone marrow - a process known as engrafting - it's first necessary to eliminate key components of the recipient's own blood and immune system.

Traditionally this has been accomplished with toxic doses of chemotherapy or radiation, or both.

But this pre-treatment, known as conditioning, is so harsh that clinicians have been hesitant to resort to haematopoietic stem cell transplantation unless the patient's life is threatened by their disease.

For this reason, most transplant recipients have been people with cancers such as leukaemia or lymphoma.

Haematopoietic stem cells for transplant are typically obtained by collecting them from either circulating blood (although the cells usually live in the bone marrow they can be induced by specific drugs to enter the blood) or from the bone marrow itself, which is why the procedure is often referred to as a bone marrow transplant.

In either case, the recipient receives a mixture of cells from the donor, only some of which are haematopoietic stem cells.

Unfortunately, some of those passenger cells include a type of immune cell called a T cell, which Weissman and others have shown is responsible for a life-threatening transplant complication called graft-versus-host disease.

This occurs when the donor's cells recognise the recipient's tissues as foreign and begin to attack it.

Clinicians try to reduce the likelihood of graft-versus-host disease by using donor stem cells that immunologically match the recipient as closely as possible.

But those matches can be difficult to find, particularly for some ethnic minorities.

Although it's possible to do transplants with less-than-perfect matches - a situation known as a haploidentical transplant - the recipient then requires ongoing treatment with strong immunosuppressive drugs to prevent rejection or graft-versus-host disease.

Although pure haematopoietic stem cell transplants avoid this outcome, they are more difficult to obtain in sufficient quantities, and they engraft less readily than whole bone marrow.

"We wanted to eliminate three major barriers: the toxicity of the conditioning procedure, the need to have an immunologically matched donor and the difficulties in transplanting purified haematopoietic stem cells," George said.

The researchers found that treating mice with a combination of six specific antibodies safely and efficiently eliminated several types of immune cells in the animals' bone marrow and allowed haploidentical pure haematopoietic stem cells to engraft and begin producing blood and immune cells without the need for continued immunosuppression.

The degree of difference in a haploidentical transplant is similar to what naturally occurs between parent and child, or between about half of siblings.

"This finding suggests that, if these results are replicated in humans, we could have a child with sickle cell anaemia in the clinic and, rather than considering stem cell transplant as a last resort and contingent on finding a perfectly matching donor, we could instead turn to transplant with stem cells from one of the child's parents as a first-line therapy," George said.

Additional experiments showed that the mice treated with the six antibodies could also accept completely mismatched purified haematopoietic stem cells, such as those that might be obtained from an embryonic stem cell line.

After transplantation with the mismatched stem cells, the recipient mice developed blood and immune systems that contained cells from both the donor and the recipient.

This allowed them to subsequently accept transplants of heart tissue from animals genetically identical to the donor animals.

"The immune systems exist together in a kind of a symbiosis," George said, "and they view both the donor and recipient tissue as 'self.'"

This suggests that it may be possible to make haploidentical stem transplants both safe and achievable in human patients without the need for either conditioning with radiation or chemotherapy or subsequent immunosuppression," said George.

The researchers are next planning to conduct similar antibody-mediated conditioning followed by transplant with mismatched haematopoietic stem cells in large animal models.

If the technique one day clears the hurdles necessary to prove it is safe and effective in humans, the researchers envision a time when people who need transplanted organs could first undergo a safe, gentle transplant with haematopoietic stem cells derived in the laboratory from embryonic stem cells.

The same embryonic stem cells could also then be used to generate an organ that would be fully accepted by the recipient without requiring the need for long-term treatment with drugs to suppress the immune system.

In particular, Hiromitsu Nakauchi, MD, PhD, a professor of genetics at Stanford, is studying how to generate human organs in large animals from laboratory-grown stem cells.

"In the past, these stem cell transplants have required a complete match to avoid rejection and reduce the chance of graft versus host disease. But in a family with four siblings the odds of having a sibling who matches the patient this closely are only one in four. Now we've shown in mice that a 'half match,' which occurs between parents and children or in two of every four siblings, works without the need for radiation, chemotherapy or ongoing immunosuppression," said Weissman.

"This may open up the possibility of transplant for nearly everyone who needs it. Additionally, the immune tolerance we're able to induce should in the future allow the co-transplantation of haematopoietic stem cells and tissues, such as insulin-producing cells or even organs generated from the same embryonic stem cell line," he added.

Weissman is the Virginia & D.K. Ludwig Professor for Clinical Investigation in Cancer Research.